Cocoon of the Heart 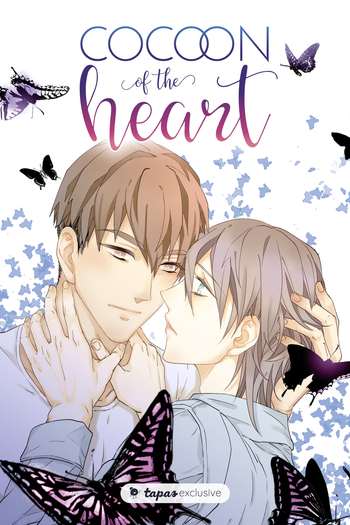 Jeff Fang hates Terrence Lu. He hardly knows him, but Terrence's very existence is a constant reminder of the misfortune Jeff's family had to go through. However as they continue to attend college together, Jeff's feeling towards Terrence starts to change.

TRIGGER WARNING: this mentions suicide, there are rape, self harm and suicide attempts, and self harm scars are shown graphically. Basically, this whole manhua revolves around mental illnesses. The trigger warning might be a spoiler but people should know this before reading because it ended up being pretty triggering for me. Nowhere is mentioned in the tags that it involves these things, so I wasn’t prepared for it. Now, would I have not read it if I knew upfront? No, I would have still read it but if I knew what it was about, I could have prepared myself for it and its impact on me. That’s why I want to warn other people.This is the fourth manga/manhua that I’ve read that deals with mental illnesses. It’s pretty rare to find some that talk about these kind of topics. Did it deal with it in the best way? No, not at all. The character who took care of the person with depression wasn’t mature enough at first to do it. The things he did to prevent that the other person would do something to hurt himself, weren’t okay. An explanation could be, is that he didn’t know enough about depression, how to help someone with depression, and that he was at his wits' end and did the things he did because of that. Still, it wasn’t okay at all. Though, along the way, he got better at taking care of that person. (I’m not mentioning names because that would be a spoiler).I’ve read some comments of other people who were saying that the person who took care of the other person was way too possessive, toxic and controlling. That’s true, but do you know what it’s like to take care of someone with depression? You’re constantly on edge and scared out of your mind that the other person’s going to hurt themselves or even commit suicide. I’ve been in that position. Wanting to know all the time were that person is going, were they are, what they’re doing,… When you’re dealing with someone who is really depressed and suicidal, I think it’s bound to happen that you become controlling to some degree. Though, this should have its limits. You can get too possessive and controlling, and I think that’s what happened at some points in this manhua. Also, at some moments he really was toxic. Yet again, I think this was because he didn’t know how to deal with someone with depression. Though, he really had his sweet and cute moments too.I also read some comments saying that the character who’s dealing with depression is really annoying. That kind of broke my heart because the way his mental illnesses were shown, was very realistic. Not being able to accept love, can be a part of depression. It must be really frustrating for the other person who is being sincere but that does NOT make the other person annoying. Really, hearing that boiled my blood. To me, that’s a sing that you don’t understand how it’s like to have depression. If that’s the case, don’t talk about things you don’t understand.Now, to go back to the start of the manhua, Jeff’s behavior wasn’t okay at all. I could understand his feelings to a certain point because he was dealing with his own things and just needed someone to put the blame on. Though, his actions weren’t okay at all! I wish it didn’t happen. I wish the first half of the manhua didn’t exist. But it does and that’s why it has a lower rating than I would have given if these things weren’t included. Another reason, are the plot holes that weren’t explained.What I liked about this manhua, was the chibi-like art that was shown at some points throughout the manhua. It was really cute. Terrence is the cutest thing ever. Also, I really loved the ending. It could have ended way differently, so I’m glad they went with this ending.