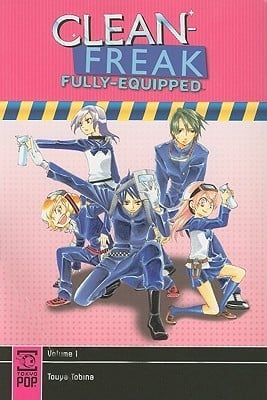 High school can be a stressful time for many young people. The change means a new commute, new friends, new courses, new teachers. For Shino Oshima the change could have meant an opportunity to blossom into adulthood. Unfortunately, things go wrong on her first day - she fails to even say her name during her homeroom introduction. From then on Shino is a part-mute part-stuttering mess. Ostracized and afraid she struggles to find her place in this new world... But thankfully for her, she finds her voice through music and some unexpected new frienemies.

Aoyama is a handsome young soccer genius who's a Japan representative. His play style is "cleanliness." He doesn't tackle and doesn't head the ball. If he's doing a throw-in, he'll only do it if he's wearing gloves.

Kuginashi Bon is a middle school boy suffering from severe gynophobia. One day, a group of weirdos suddenly move into the apartment next door and declare they want to help him overcome his condition...

A boy suffering from severe OCD has locked himself in his room for the last 5 years. But his life changes when he meets a girl in a wheelchair with her hands deformed. Despite her disability she's a very skilled e-sports gamer playing only with her mouth.

Aoki Kaoru is a 26-year-old woman who has never had a boyfriend. Normally unattached and unmotivated in her own life, Kaoru decides to start up a nail salon as a side business in addition to her regular job as a medical dispatcher. Although having a severe aversion to physical touch, she is forced to confront that fear when she meets a man who can?t help but touch others.

Niito Nemuko, nicknamed Neeko, is 23 years old and still unable to find a job. This is her everyday life as she struggles with the fact that she's basically just a NEET.

Panic disorder, depression, developmental disorder, PTSD... Japan is said to be a country of hidden mental illnesses, where many patients suffer from mental illnesses without being able to talk to anyone. The suicide rate is one of the worst among developed countries. How has Japan fallen into this kind of situation? Psychiatrist Konosuke Yowai confronts the problems facing Japan's psychiatric care and sheds light on the shadows in people's minds.