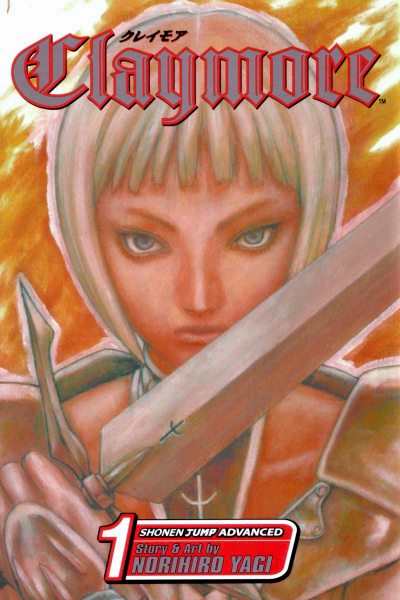 Claymore is one of my favourite fantasy manga. Oddly enough, it's by the mangaka of Angel Densetsu, which is a... delinquent comedy in a high school setting. Well, I liked that one too, and it shows versatility on the author's part that he can pull of both comedies and "darker" manga.

On the surface, Claymore is a manga about the half-monster Clare who goes around somewhat merrily (since she never looks particularly happy), slaying Yoma, a kind of monsters. Or more accurately, it's about several women (yes, women - so if you don't like those you should get out) who slay monsters, after a gloomy organisation called "The Organization" (yep, I'm not kidding) had changed them. And because they wield big-ass claymores, the public calls them "Claymores" - or silver-eyed witches, because the changes give them silver eyes. This seemingly overly simplistic story where monsters get killed is all you get to see in the first couple of chapters.

But it picks up. Boy, does it pick up. As I learned more about these Claymores, about this world, about the organization, I found myself unable to put it down. The plot showed itself, and it was a lot more complex than I initially expected. The characters were fleshed out and developed, making me actually care for them - heck, I even ended up liking Raki, a notoriously whiney broken record. And the fights were pretty cool too.

The art in Claymore great too, especially when getting closer to the end. Scenery, monster designs, action scenes,... they all look great.

The biggest criticism I always hear is that the faces of the characters all look the same. While this isn't quite true, I have to agree that the differences are often quite subtle. The fact that the huge amount of female characters can't look too different because of plot-related reasons also plays a part in that.

Claymore is one of my favourite manga, especially when it comes to action/fantasy series. I strongly recommend giving this one a try.

This is heck of a story,absolutely one of my fav. out there.

Its sad and at the same time intriguing.

It just makes you read more and more until you find the ending.

My personal opinion is that u should try it.

Not believe me well u should look others reviews and see for yourself. :D

About art eh, Norihiro could do more about faces of womens and some stuff but overall but when it comes to fight you will now what its about.

Like i said i think he mostly focused on battle but thing over thing what the most important is story characters comes later.

I know i didnt explained much (sorry) i just wanted to give you guys some my personal expresions thats all.

Above else CLAYMORE is so worth reading.

All those good things they told you about this manga, it is true, up to a certain point. Characters are fantastic, each having a different personallity, motivation, flaws and fighting styles. There is a strong enemy behind the scenes, one that cannot be defeated, one that tears throught our heroes without even showing his face... And then puff he is dead and there is a new monster every volume that is stronger than the previous one... By the time you reach last fight nothing will surprise you as new abilities are made up to kick down a corner story has reached. Tens of new characters will appear and you will not care about them, besides few main ones, others are pointless and serve... Well I'm not even sure, probably again just to push story forward. Now, I do sound a bit harsh, I gave it 7.5 after all... Simply putt, Claymore is a great series at the start  and through the middle, but after volumes in the North, quality drops quickly, if story ended there and then I would give it 9/10 with ease, but it dragged on and became mediocore.

I picked it up after finishing the anime. Oh boyy it was so good and specially the fights are long and cool. I hope they also make complete anime on it ♥

Claymore was quite an interesting read for me, although I personally don’t think it should have gone on for as long as it did. It fluctuated between me greatly enjoying it and me sitting there bored out of my mind and wondering how long a particular scene was going to drag on for. That was something that became an issue for me later on in the series rather than sooner.

One thing I love about Claymore is its characters. The mangaka manages to write them all so differently in spite of them having the same job, very similar appearances and (generally) similar views towards their situation as a whole. I found myself growing attached to virtually everyone, which may not seem surprising for a 155 chapter series, but for characters who almost seem to be identical to each other at first, it’s impressive. Clare and Teresa’s background story pretty much made me tear up. What happened to Priscilla made me feel terrible. These characters and their intricate, thoroughly-planned development hit me hard somehow, and that’s something I’ll always praise Claymore for.

The art... gets much better. I disliked it with a passion at first, but the series ended with much better art. People’s facial features just looked very off to me when I first started reading. The eyes and faces were really wide, and kind of disproportionate. They just looked so bad to me. But other than that, on the whole the art is more realistic and skilful than what I’ve seen in some other manga. Once you get a little way into the series, the artwork is pretty great on an aesthetic level. The amount of detail that goes into some of the action scenes is brilliant and gives off so much life. It has its own individual style which the mangaka has really turned into their own.

The plot didn’t fare as well for me. It started out pretty well, and there were points that I absolutely loved reading it. This was mostly down to the slower yet intriguing introductions of new characters and a stronger sense of purpose and development within the story. But it diminished a lot throughout, particularly towards the end, and I wasn’t sure if finishing it would even be worth it because of how much the plot dragged on. It became so much messier and difficult to enjoy than it was beforehand, partly because the amount of characters had increased and partly because the plot became way too thick for my liking. It was so hard for me to follow and I think it would have warranted a much higher rating if it hadn’t dragged on so much.

But the story, and the imagination behind it, was pretty great. You can tell it was quite well planned, mostly due to the amount of detail that’s gone into the overall idea of the story. This idea of a whole organisation that’s concerned with ridding society of these vile monsters while inadvertently creating them and tossing aside basic morality is fascinating. The story is kind of split in several different ways. We start out thinking it’s just humans and claymores against yoma, but it’s so much more than that, and obviously took a great deal of work and intelligence to produce.

I’m giving this a 6 because, while my review sounds very positive, I found it extremely hard to enjoy towards the end. I am glad I finished it though, because it introduced me to a story and set of characters that I don’t think I’ll ever forget. It’s well done but over-done, if that makes sense. It drags itself out too much, and that’s what makes it suffer. But it’s certainly not a bad story.