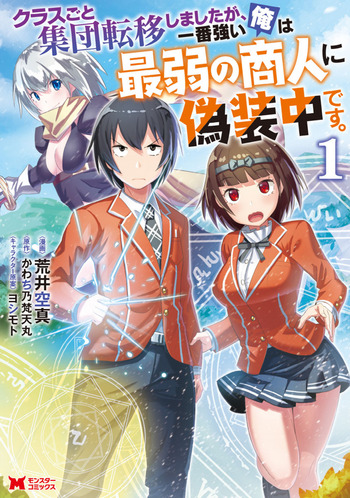 I Got Caught Up In a Hero Summons, but the Other World was at Peace!

When you get summoned to another world, things are supposed to go a certain way: become a hero, battle monsters, and slay demons, right? But when Kaito gets his summons, things are a little different. First off, he’s not even the hero…but it doesn’t matter, because the world he’s been thrust into is at peace. With nothing better to do, Kaito finds himself taking it easy in this unexpectedly mellow fantasy world. Now he can breakfast with its beautiful denizens, learn magic with the help of a spunky demon girl, go to barbeques, and so much more!

When an entire bus of people are summoned to another world, Souma Nagi doesn't go along with the idea of being a Hero like the rest. Thus he leaves the palace and starts his life in another world with his ability to restructure skills.

When Kirishima Ran and his classmates were transported to another world they each received an ability. However the ability he received, [Sexual Lunatic], has caused nothing but trouble for him. His ability allows him to make any girl he comes in contact with his slave. Because of his ability, his classmates have shunned him and forced him to separate from them. With the fires of revenge burning inside his heart, Kirishima decides to overtake the class from the shadows. One by one he turns his classmates into slaves and fill his desires.

Some years ago, the entire area of Akihabara disappeared right off the map, with its buildings and streets suddenly appearing in the midst of a fantasy nation called Fairleaf. Surprisingly, the natives of Fairleaf take to Akiba's moe culture with reckless abandon, and declare bishoujo games and dating sims a boon from the Gods themselves! Little do they know, a game developer by the name of Toshinori was the only person caught up in the summoning, and decides to capitalise on the new Fairleaf gaming boom. But with his game still floundering in development hell years down the track, and his beautiful assistants being of little help to him, Toshinori hatches a plan: to (somehow) summon game creators from the real world to help him out!

Touno Hifumi was summoned to another world, to be a Hero for a kingdom. Unbeknownst to the summoners, he's a kill-happy person who restrained his killer instincts with martial arts. Upon arrival he slaughter various knights and the mastermind of the event, the King. Unwilling to oppose this strong killer, the Princess let him go free. Thus start the fun life of travelling the world, unrestraintly killing any who attempt to kill him. But first, lets purchase a pair of female slaves.

I Was Invited to the Otherworldly Country As a Warrior, But I Refused and Decided to Start As a Soldier

That day, the 17 students in the classroom suddenly vanish out of the world. They are just ordinary high school students but summoned to another world all at once. Yukikazu is one of them. In that world, the king offers them to guarantee their security and their status as warriors. Most students accept the offer but he refuses it and goes on his way as a soldier...