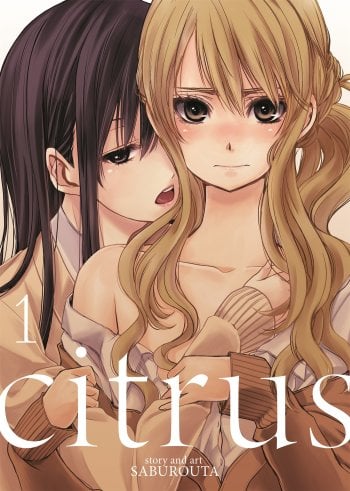 I'll probably keep reading the new chapters to see if it gets any better, but I'm pretty disappointed in Citrus overall. The art's lovely, but the story could have been so much more - and honestly, I expected so much more after seeing so many glowing ratings and reviews. The characters, who rarely rise above shoujo tropes, behave either predictably or erratically. A few moments have suggested deeper reasons behind the characters' actions (particularly Mei's), but I'm not sure if, by chapter 17, we've received such fleeting character development because the author is building up to something bigger or just...because it's the author. Because every time it feels like Citrus is starting to go somewhere or do something smart, the author throws in another tropey plotline or a wild sexytime appears. When the story has built up to the romantic scenes, they're nice. The majority of the time, however, it just feels like another shoujo twist thrown into the plot to keep things going, even if it makes no sense ("I thought this but then she did THIS"). Which wouldn't bother me if it felt like the story was intelligent enough and the characters were fleshed out enough that it seemed as though they were acting with purpose - in accordance to traits and/or experience the readers simply may not understand yet. Instead, it feels like the author is simply flinging the characters whichever way she happens to feel at the given moment. The protagonist pleasantly surprised me a few times, however, with her self-respect (when being taken advantage of) and her resolve/faith in Mei (which won out against the antagonists).

A broken clock is right twice a day, though. I hate to be critical but I was really hoping for a lot more from a shoujo-ai manga as hyped as this one.

omg how can i even start .

well i know it is still ongoing but this manga is still amazing and here are the points thay made me fall in love with this manga even tho it was my first time reading a yuri manga.

first of all the art!! it is so fricking beautiful and perfect !just amazing (check it for yourself) :) another thing is the characters that are so perfect and you definitelly will fall in love with them.

even if you are not that into yuri you should definitely go read this one, at least the first chapter just for the amazing art.

and i know mybe you are wondering how can i say its the best there is of all the yuri manga ones but i spent alot of time  searching for mangas that can top this one so i would watch it but i didnt find... so i guess there is none of other yuri mangas that are as good as this one.

ty for reading my review and i hope this will convince you to go check it out :)

love it! amazing manga about two girls who are step sisters and have a quirky, romantic relationship! really good! However, anime-planet needs to update how far the chapters can go (unsure about vol) I am currently on ch. 20 waiting for 21 and as of when I'm typing this, you can only mark that you've read through ch. 16

Like the anime, it feels very superficial and missing emotion. The characters are so poorly written it hurts. The ending is very disappointing and rushed. Just very unfortunate, because it could have really been good with better writting and character depth. I was confused from certain characters actions. Some of them didn't make any sense. Just really disappointed with this romance manga.

It might be your typical Yuri story but honestly, I don't really care. I cried, and obviously if a story can bring me to tears, it's decent enough to be recommended.