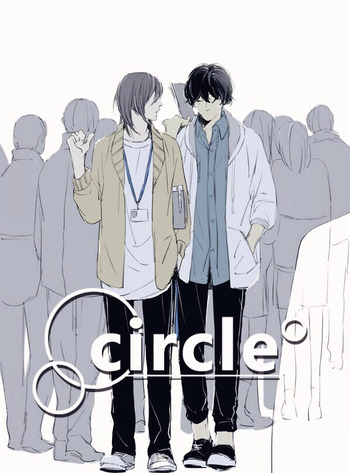 Whaaaat? This manhua doesn't have a review yet??! My review is for chapters 1 to 96 and will be very enthousiastic! I loved Circle. Who said high school romance was dead? :)
4* for that manhua which just like 19 days gives us a complete breathe of fresh air in terms of shounen ai in high school (let's face it, we all are a tiny bit tired of high school romance, their lack of orginally and multiple repeat)
It's a story of characters. Everything is created so that you are litteraly drown to them as you keep on reading. 4 characters evolving together or in a pair, and triggering friendship where and when you expect it the least. Somehow, they all have though skin and are raw diamonds. It's about bullying to not be bullied but that's only the few first chapters... then it's about something else. About growing up and getting ready to enter the adult world. And yes, it goes in circle.

A special note from me: (MILD SPOILER)
Best friend: without hesitation LI AO. Good boy!
Best line so far: 'This is not a chance meeting. It's me finally finding you. No matter where you hide, I will always find you' (I'm quoting/sobbing)
Best position: Being picked up (from the ground) in a game in the streets of Macau
Best underware: pink lace lingery tossed in a luggage even if we don't get to see anyone wear it...(Ohlala / say no more!)
Best reaction: MI XI watching a certain someone about to eat a sausage stick
Best food: I didn't think an apple would ever make it in this category BUT That apple sure deserve it. We need more good food around this manhua!
Confession rate (an easy i like you will never get you in): MI XI wins with an easy 8.

The story: mention to the artist Zi Ying WANG who avoided stereotypes (up to a certain point). The story brings nothing new BUT It's more than that: The characters build a made up story (like in 19 days or Chemistry has 'reactions') and it's really well done. I didn't like the demons of the past coming back, I am not sure it serves the story well, and I think it's a common mistake to often make female characters being a bit evil in a shounen ai story. Gays are not gays cause they hate their mom. And straight guys don't go for a gay experience just because they had a pathetic sister and a best childhood friend that also happens to be gay... so it would be great if we could in 2018 walk away from these cliche, wherever we are in the world. I think it's well done that the story doesn't only focus on MI XI and XIAO SHANG but they are my favorite and I think their story is far deeper and far better.

The art: Absolutely stunning. It's beautiful. Faces, clothes, atmosphere, everything makes you attracted and draws you in. Some bit of conversation here and there could/should have been drawn rather than just being a buble on a blank page. Some of the words said deserved an image and I regret that the editor didn't spot that (it happened a few times...) I like that it's black and white. You can clearly feel colors and mood, nothing is missing, which makes it definitely a hit.

The Characters: Ohhhh the characters... This is the sh*t. I was lucky enough to read this at a late stage, so I have read the full first season, and a few chapters on the second one. And... I can tell where the author has grown so much from her story. All of them have in store a few surprises. And all of them are complex being, their reactions building the story along the way. It's when you know your characters so well that it becomes real and fascinating. Realistic love stories, but more importantly journey to accept yourself as you are, for who you are and spending energy on the ones who love you rather than the rest of them...

Conclusion: Why not a 10/10? Because I am not 18 anymore baby and so... having been around the block you need a little more in depth story to score perfection. but that's just me... I love you Circle and I have high hopes on what is coming next.

Thank you for reading! I'd love to hear your feedback so I can improve! Leave me a comment.

I'll just say it's the best.