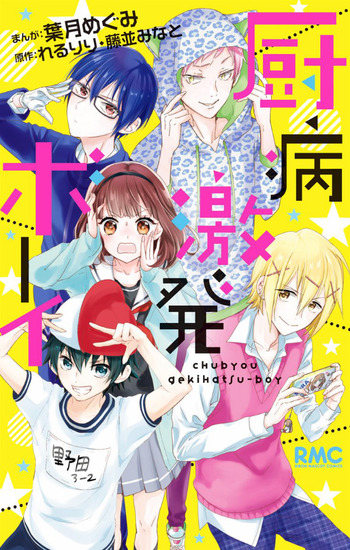 Heroines Run the Show: The Unpopular Girl and the Secret Task

Follows Hiyori Suzumi, a high school girl who becomes a manager-in-training for the high school idol unit LIP×LIP. Hiyori left her hometown to pursue her passion, track and field, by enrolling in Tokyo's Sakuragaoka High School. Looking for a part-time job in Tokyo, she ended up working as an apprentice manager for her classmates (and LIP×LIP members) Yuujirou Someya and Aizou Shibasaki. The story revolves around the coming-of-age of Hiyori (as she juggles school, extracurricular life, and managing) and LIP×LIP (as they shine on stage).

Like most awkward teens, formerly reclusive gamer Eruna Ichinomiya struggle to find her place at Mikagura High School. But her experience is far from ordinary, as the mischief-making members of the school’s manga, calligraphy, drama, and other cultural clubs vie for total school domination in a rather extreme way—ULTIMATE ATTACKS. Get ready for the high-energy high school adventure you’ve only ever dreamed of.

The story centers on Otarō, a creature themed around dirt known as a yogoremon. It and other yogoremon will ask the meaning of words and explain negative terms in positive ways.

The Moment You Fall in Love

Their initial encounter couldn't have been more disastrous, and yet before she knows it, Hina finds her heart pounding. Drawn to Koyuki, a former upperclassman at her middle school, Hina makes up her mind to go to the same high school. Along with her childhood friend, Kotaro, she enrolls at Sakuragaoka High School. Will Hina be able to confess her love to her beloved senpai?

This is the last time I’m going to practice… Natsuki Enomoto, a third-year student at Sakuragaoka High School, has feelings of unrequited love for her childhood friend, Yuu Setoguchi. Unable to be true to her own feelings, Natsuki tells Yuu that she is merely using him as a stand-in to practice confessing her love to. As Natsuki continues to pretend not having any feelings for Yuu, her classmate Koyuki Ayase asks her out on a date. Will Natsuki ever be able to stop “practicing” and actually confess her love to Yuu?

Immemorial Love For You 2nd Season

The second season of Immemorial Love For You.