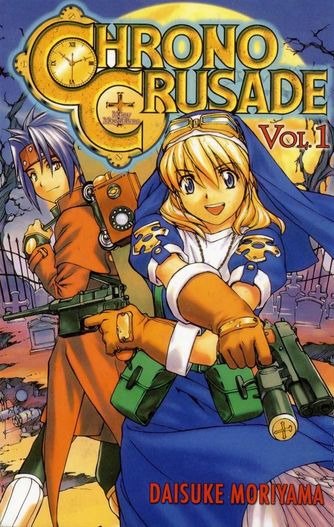 When people think of shounen anime and manga they will undoubtedly think of stories that follow the typical format of never giving up and believing in your friends. Along the way the main characters in these tales may gain various abilities that make them insanely powerful, or gather a bevy of beauties, all of whom have some illogical desire to be with the main character.

There are, however, a few titles that attempt to do something a little different. The first anime adaptation of Full Metal Alchemist, for example, took a much darker turn than one might normally expect in a shounen tale. Likewise Akira followed its own dark path, but one born of politics and science rather than alchemy. Casshern Sins roamed a post apocalyptic world in search of forgiveness and salvation, while Black Lagoon decided to wallow in the dark places of modern civilization.

And then there's Chrno Crusade, which at first glance may appear to be nothing more than just another super powered shounen manga. Looks can be deceiving though ...

Created by Moriyama Daisuke, the manga began serialization in Dragon Magazine in 1998 and ran for six years. In 2003 the story was adapted for anime by Gonzo, and since that time both versions have garnered a number fans across the world.

The tale begins in 1924 with a cargo ship that has crashed into the New York harbour. Officials and police are startled to see a monster suddenly leap down from the flaming deck and start attacking people, but are even more surprised when a car crashes into it. From the wrecked vehicle emerges a girl in a modified nun's habit, and a young boy carrying a large backpack. They are Rosette Christopher, professional exorcist and monster exterminator, and her partner Chrno, and they have been sent from the Order of Magdala to "deal with the situation".

Now one of the biggest criticisms levelled at the story is that there is simply too much going on, and it's a fair argument as the tale does indeed pack a lot into 57 chapters. The series incorporates a lot of religious symbology, and mixes it with action, demons, romance, some science fiction, magic, and ... aliens.

That's right. For some reason Moriyama included aliens, but unlike Seikimatsu Occult Gakuin, the numerous and disparate threads actually work rather well together. While there really is a lot going on, each aspect of the plot plays a role withing the story, and nothing feels like it was simply tacked on because the author ran out of ideas. Even the aliens are nothing more than an explanatory note rather than the main focus of the story, which brings up a rather interesting point. If anything, Chrno Crusade is something of a triumph for Moriyama, as very few shounen tales are able to move the plot forward during action sequences. While there is plenty of combat throughout the story, there is always the feeling that the characters are unwilling participants at best, and it's because of this slightly off kilter approach that Moriyama is able to progress with the story even while the characters are fighting, and without resorting to long winded diatribes.

If you're not sure what I mean, then have a think about some of the more successful shounen manga like Bleach, Naruto, etc. Whenever the characters get into a fight the storyline simply stops while they duke it out with whichever bad guy is there at the time. Granted this is partly because of the difference in length between the series, but if Oda Eiichiro can do the same thing with One Piece that Moriyama does with Chrno Crusade, then it does ask certain questions of Kubo Tite, Kishimoto Masashi, and the other long running authors.

The artwork throughout the manga is pretty good on the whole, with nicely detailed settings and many signs of 1920s America (clothing, cars, buildings, etc), on display, however there is a certain generic quality to the character design which is reflective of the shounen nature of the story. One of the problems with this is that it may dissuade potential readers who are looking for something a little different to the norm, however it should be pointed out that while the characters themselves may not look like anything particularly fresh or different, they do display a good degree of visual expression. Now one could argue that this is much the same for almost every shounen story, and that is true to a point, but we'll get to that in a bit.

Probably the biggest surprise in Chrno Crusade is the depth of the two lead characters. Both Rosette and Chrno have justified reasons for the path they follow throughout the story, but this is further supported by the other characters as well. In addition to this the pair share a history that predates the manga's storyline, and their close relationship is apparent from the very first chapter.

What is surprising is that both characters don't really develop in the normal sense, but instead seem to extend their characterisation, with each becoming more "defined" as the plot develops. Much of the actual development seems to occur on the part of supporting characters like Satella Harvenheit and Azmaria Hendric, and while this may seem strange at first, one could argue that it's also a very "shounen" approach, and one that is prevalent in stories like Full Metal Alchemist, InuYasha, and others of that ilk.

One of the things that struck me about Chrno Crusade is how very different the manga is to its anime counterpart, especially as the latter lacks the aliens (amongst other things). That said, I found both to be enjoyable in a way that many shounen tales normally aren't, and the main reason for this was the much darker tone that is prevalent in both versions of the story. Granted the series is top-filled with shounen aspects and stereotypes, in particular where the character design is concerned, but Moriyama's skill doesn't lie there, instead showing itself in the complexity of the plot and the strong characterisations. Given the numerous, disparate threads running through the story, it's a testament to his ability that many of them not only play a part in the whole narrative, but also gain a degree of resolution.

Yes, there's plenty of action and the story plays fast and loose with religious symbols at times, but in amongst all of the hi jinks lies a strangely captivating tale that has one thing at its heart - love. It drives many of the characters, and it's surprising to find the theme works extremely well in what is effectively a super powered shounen tale.

No matter what one thinks of the story itself, Moriyama deserves praise for trying to do something different to the norm, especially at a time when the industry was very resistant to new ideas and approaches, and even now there are few shounen anime and manga that try to go off the beaten track.

That said, given the success of Full Metal Alchemist, Casshern Sins and Black Lagoon, maybe the industry is finally getting the message.

I give this a 9 overall due to it was a great read. Plenty of story to keep you entertained and enthralled with the characters and their world but not so much story that it fries your brain. The art was well done for it's intended audience (13+). And I personally really enjoyed and liked most of the characters, even the bad guys. It's one of those series that made me anxious to read the next chapter once it got going. I say "get going" because like with all good stories it takes the first few chapters to get you acquainted with the characters. But what really stood out for me is that I have read, watched, and played more "peeks of life" then I could ever count, and this was one of the very few (less then 5) that while reading it, I got choked up and teary eyed. A great series. I highly recommend it.

And now, as promised, the review for the manga as opposed to the anime. As I said in my review of the anime, the manga is so much better (to me, of course, perhaps not everyone feels that way), and so here's why my scores are higher here than there:

Story: For the anime review, I mentioned that at first the stories were the same, but then the anime branched off and took an entirely different route, though the endings were similar, and both of them tear-jerking, though I found the manga's story much more interesting. At times there can be a lot going on, but for me, it wasn't hard to keep track of.

Art: The drawings are absolutely gorgeous, each panel detailed and inked wonderfully. The detail on each page is amazing, and the shading is very detailed. Each of the characters looks interesting and unique, and their personalities really shine through in their expressions. Moriyama is a wonderful artist, and his use of panels and frames and perspectives is really wonderful.

Characters: On the note of characters, their looks aren't the only unique things- they all have interesting personalities that are very realistic. That's not to say everyone will fall in love with each character, as that's pretty unrealistic, but most people will almost certainly find at least all of the characters believable and human (or, you know, human-like). I know I certainly loved each and every character in their own way, and I imagine most people will feel the same.

Overall this is one of my favorite mangas ever- actually quite possibly my favorite, period, to date. I'd recommend it to pretty much everyone and anyone. The unique blends of characters and the intriguing storyline are sure to draw anyone in- but be warned in advance, the ending's a bit of a tear jerker.

JUST TWO WORDS FOR THIS MANGA:

This was a great read! Gave me FMA vibes. Very exciting story.