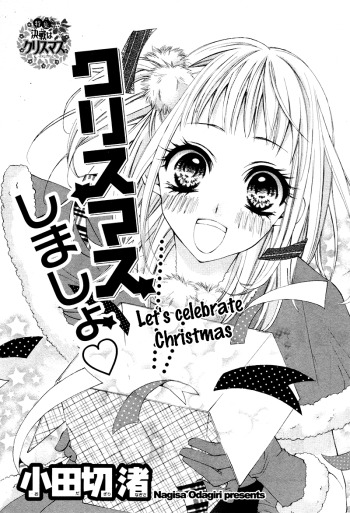 Miki always loves to be the first in everything. She now aims to be the Seiryou Miss of the school Christmas party. She plans to confess to the school's prince, Suga-senpai, when she's chosen and be his first girlfriend. However, her guy friend, Yuuma, who has always supported her, opposes her this time. Why?

A cute short story about a girl who's a tomboy, but whenever she's around him, she seems to turn girly.

Christmas is a joyful time to eat cake with loved ones. But is that the case for Hujita?!

Behind Student Council Vice President Yuuko's cool facade lies a secret that she is desperate to keep from flamboyant President Hasumi. But how long can she go before her mask cracks on Christmas Eve and she's exposed?

Setsuna and Hijiri are always found to be at loggerheads. Setsuna bakes some cookies for Hijiri before Christmas to make her feelings reach him. But Hijiri doesn't seem to like the idea of Setsuna making cute cookies and retorts rudely. How will their story progress?

Momiji knits a sweater for her friend, Yunobe, who's going to be in the school's Christmas fashion show.