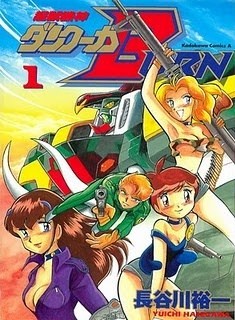 Marg was deprived his little brother, Mars, by Zure, and lost his parents. Therefore, he was living alone on the planet, Gishin. He became a member of guerrilla to riot against the dictator Zure, and he fell in love with Ruru, the daughter of the leader, Ura. However, the organization was destroyed. He was trapped by Zure, and he was brainwashed to become a soldier. Then, his long cherished wish that he would meet his brother again was realized… as a duel with him.

Watta Takeo isn't just a rambunctious student, he's also the pilot of the giant mecha Trider-G7! Along with his assistant Senbu Kakikoji, the lovely Ikue and others at his company, Watta is called upon to complete jobs that range from ordinary to protecting a space station from an invader. Can Watta and Trider-G7 keep money in the company's pockets, and also manage to protect the Earth?

The day before the ceremony marking the completion of the Yajima Stadium, Nils Nielsen invites Sei Iori, Meijin Kawaguchi, and others to an exhibition battle using the new large-scale battle system he has designed. Now that they are all reunited, Sei attempts to show off the Build Strike Cosmos that he has upgraded for the exhibition, but then he notices something missing... Meanwhile, somebody takes control of the stadium's systems, sealing Sei and the others inside. Before them appears a mysterious group, which has come to challenge them to Gunpla Battle.