Alt title: Dad, the Beard Gorilla and I 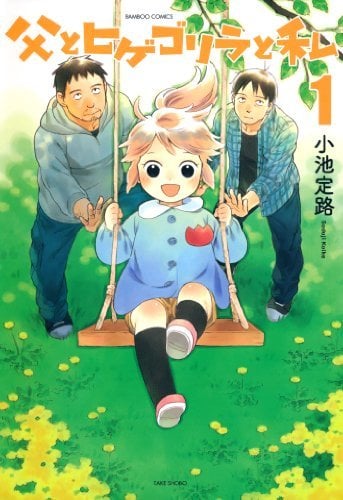 If you're looking for manga similar to Chichi to Hige Gorira to Watashi, you might like these titles.

Both are comedy manga about single (ish) fathers raising their children. Both use a lot of slapstick comedy and are very light-hearted and enjoyable reads.

Yaichi is a work-at-home suburban dad in contemporary Tokyo; formerly married to Natsuki, father to their young daughter, Kana. Their lives suddenly change with the arrival at their doorstep of a hulking, affable Canadian named Mike Flanagan, who declares himself the widower of Yaichi’s estranged gay twin, Ryoji. Mike is on a quest to explore Ryoji’s past, and the family reluctantly but dutifully takes him in.

Both of these manga are about an adorable little girl, her father and her big bear-like uncle coming to stay with them.

32-year-old Bushido-sama considers himself to be a modern-day Samurai. When his wife passed away due to illness, he promised to raise their daughter into a fine woman. But, for an adult male, raising a child is not an easy task. The tasks range from teaching proper table etiquette to sex education... Welcome to the life of a Samurai father.

Daikichi's grandfather dies, leaving behind a young daughter named Rin. However, as most of the family is embarrassed at the idea of a 79-year-old man having a six-year-old child, they can't seem to figure out what to do with her. Disgusted by this behavior, Daikichi decides to take care of her himself, but he's a bachelor, has no idea how to raise a child, and doesn't even like kids! Now, Daikichi must do the normal things a parent does such as enroll her in school, buy her clothing and teach her about the life and world around her. But more importantly, he must also help her deal with her father's death and decide whether or not she should try to find her mother. Together, the two begin their unlikely relationship as father and daughter.

Yoningurashi shows the family life of the Hondas; Tarou, his wife Chiharu and their two children Yuri and Kotarou. A light hearted story on everyday life and their problems.

6th grader Shima lives with her middle-aged father, Chihiro. Shima is constantly either annoyed by what her father says, while Chihiro tries to figure out the fickle nature of a young girl. Even though there are many cases where they disagree with each other, in the end, they find each other to be tolerable.