Alt title: The Small Sage Will Try Her Best in a Different World from Lv.1! 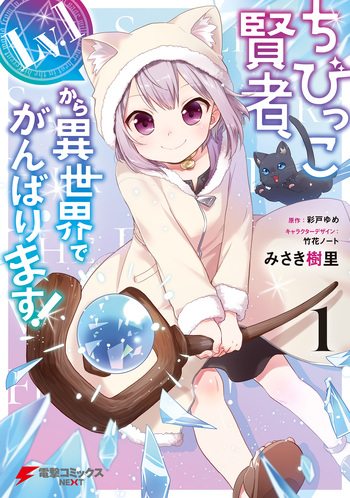 It was somewhat ok until their journey. Some plot devices were placed but not triggered at this point of time.

After the journey started the story level dropped the level rather strong. The build up sequences gave a vibe of future maturity but than it suddenly became rather plain. Simplification - that's the word. Although it wasn't sophisticated from the start, but as said. There were some moments giving some hope for future development. Like her Sage title or being in center of corrupt noble attention. Without the knights and a cat companion it would make some sense but not like this. Rubbish tbh.

There is little hope but I'll keep it bookmarked for now.

The fighting engagements and battles are badly portrayed, with no flow to them. They just throw a bunch of panels showing clashing and sword strikes. The magic-infused swords and other special moves don't even look very cool. Several of the monsters also look kinda bad, with the wolf-y ones being especially ugly. There's also no weight to the deaths that occur, and I think part of that is that non-monster deaths only occur off-screen to characters we've never met. A great example of how little effort is put into portraying these fight scenes is the Monster Flood. For eight chapters, the manga built up this Monster Flood and talked about how it's one of the most catastrophic events that occurs once every ten years and how the previous one took an entire year to suppress. And then the actual portrayal of this Flood seems like it'll be over after this most recent chapter, with only two chapters dedicated to the actual battle. I could be wrong and it could continue for longer, but currently that's what it's looking like. And even if this turns out to just be a single skirmish in a longer war, it was still a really pathetic battle.

On some level, shallow fight scenes should be expected from this manga because it's one of those "wholesome" manga that are built around the cutesiness of the main character, Yuri in this case. It has everyone getting along with each other nicely and doting on Yuri, and being amazed at the strength of feir magical abilities. The manga doesn't portray fem as perfect, so that's nice. Fe freezes up in battle and still needs to learn to control feir powers properly, but fe's still very strong. There's a subplot where fe discovers a previously unknown method of taming young monsters, and I think that aspect of the manga--the uncovering of the rules behind magic and monsters--is pretty neat.

Excellent manga about a girl who has to settle in a new world, if you like slice of life and cute interactions between all characters, then this is for you. If you're looking for a fighting manga, of course this won't do, as that isn't really the focus, although some fights are pretty cool and the enemies that appear later are very interesting as well as the way they are presented.