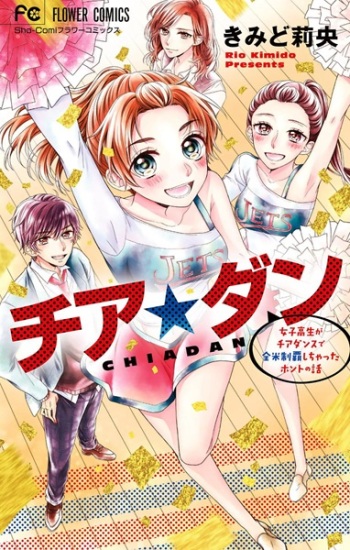 Even if she studies hard, Tsugumi can't get good grades. She also has a complex about her height. But then, someone started to cheer for her secretly...

University student Bandou Haruki comes from a family that owns a Judo doujou and has a sister who's the university judo champion, so he feels lost and without any motivation when an injury exiles him from the judo world for an indeterminate amount of time. His childhood best friend and university batchmate Hashimoto Kazuma comes to him then with a proposition: "Let's quit judo and start something completely new that's all our own!"

Fiesty, fierce Rinna Aizen is a girl with a dream — to follow in her father’s footsteps as the legendary captain of Shoryu Senior High’s cheering squad. Only problem? Shoryu High is an elite all-boys’ school! Or it was…until now! With the school going co-ed, Rinna might be one step closer to achieving her dream, but the road to a successful cheering squad is still full of hurdles…can Rinna clear them all?!

The energetic Kiri who’s in the cheerleading squad knows that Tanizawa from the baseball club hates cheerleaders. To get his approval, Kiri decides to accept Tanizawa’s challenge - at the next baseball match, Kiri has to do a back flip! Also, the Kiri that just became Tanizawa’s exclusive cheerleader is starting to have different feelings towards him…

A geta-sandals wearing girl from Kumamoto at a high school cheerleading club.

Soon after entering high school, Mifuyu is chosen to lead the bodyguards who protect the cheerleaders.

Sakamoto Masami is in his first year of high school and the ace of the basketball club. Because of his asocial behavior, his coach tells him to temporarily join the school's cheer leading club to increase his team spirit. Soon he finds out this isn't your average cheer leading club. All of sudden Masami is facing the choice to either put his male pride aside and dress up as a girl, or to never return to the basketbal club.