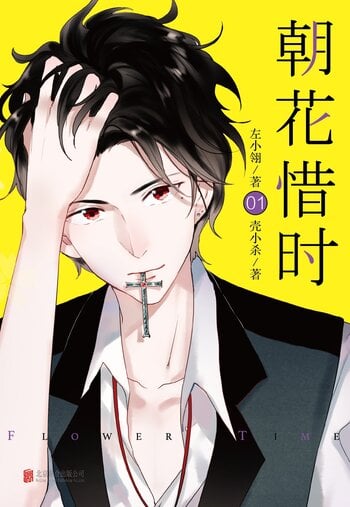 High school student Xiao Xiang An is experiencing life in the big city for the first time while she is staying with her distant relatives. At the behest of her relative's friends, she ends up disguising herself and sneaking into a bar with them where she runs into a handsome and charming employee. The following day she goes back to her regular appearance only to have a very different encounter, meeting a guy who is nothing but rude and hateful!

This is such a good manga that one can't miss. The story is good and I really appreciated that there weren't much problem between the couple, 'cause that's not my style. The story isn't complicated, but it still make one read chapter after chapter without stopping, and the grafic is really really well made, making the manga a true pleasure to read. I really recommend reading it.

YAHOOOOOOOOOOOOOOOOOO!!!!!!!!!!!!!!!!!!!!!!!!!!!! It's literally been ages since I found nice a manga to read. I never expected I would come accross such a beautiful manga in my lifetime. The artwork, the story, the characters were all divine. The plot is amazing: not even a dialogue was boring. Even the ending was satisying with plot twists in between. This is the first manga tha affected my life. Read and see for yourself if something is a tad different from before. I never experienced romance but this manga is my no.1 favourite.

Story It starts off somewhat simple, but all the same, interesting and worth the praise.  It is about girl meets a guy who is kind and helps her out alot.  At about the same time, she meets "another" boy, her classmate, who is rude and distant.  Note: there is a plot twist which is fairly obvious but just in case I will refrain from spoiling it.  The story started out very nice with lots of potential!  Then, after the middle when nearing to the end, we were introduced to too many plot twists and problems, just for it to the wrapped up much too quickly!  The ending felt too rushed!  It felt as if the author had a plan to include this and that but when actually creating it, paced it much too fast to hold any kind of significent weight on the story!  It was much less quality then the standards orginally presented, and for the less than mediocre pacing and such, a 5/10 for story is given.   Art It is fairly obvious by looking at the art that there is little to say about it.  It was nice, the colours were pretty, it wasn't the best, but definately not the worse and much above average!    Characters Xiang An (female lead//main character)- she is quite strong and independant, she can fend for herself.  Yes, there is lots of blushy blushy from her but all the same, it was natural and I don't believe I have much of a problem with her at the start.  But upon reading near the end when the secrets unfold and such, she realised she was being lied to, her reaction was... too chill.  Not to mention, the build up and flashbacks to her backstory was really interesting, but, I mean, she reacted much to normal when seeing someone since her reactions when mentioning something was signified that event was quite serious, it was, once again, a let down. Ye Ling (Male Lead) - I don't remember having a problem with him!  I think I really liked him alot, and I geniunly cannot recall any major issues i had with this character!  His thoughts were realistic and natural enough considering his position.  Of course, he wasn't perfect but there isn't anything bad worth noting about him so..yeah. There were various side characters, I enjoyed reading about the majority.  The side characters were nice personally, this wouldn't make sense to a person who hasn't read the manga/hwa/hua (I am unsure which one it is) but I would liek to applaud Bai Yi Ling's sister for how natural and relevent her thoughts, actions and such were.   Overall So yes, overall is a 7/10.  Mainly due to how rushed and badly raced some of the events were in the story.  It latter half of the story fell flat of the first half.  At first, it progressed well, then too much happened in such a short span of time!  So, do I reccomend this?  Yes, actually, it was a pleasent read more or less!  Even though I noted some flaws with the story pacing/progression and how the author wrapped everything up, it was still a somewhat enjoyable love story!