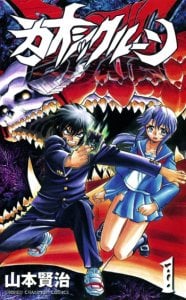 When Ryouga was a boy, he was the sole survivor of a terrible plane crash; with horror, he watched as the other survivors were eaten by a terrifying monster, healing Ryouga's wounds in the process. As a teenager, Ryouga is haunted by these memories and agrees to go with a stranger to a mysterious school for special people. However, little did Ryouga know that within the school's walls lied a brutal game in which cards are used to summon monsters and obliterate other players. Armed with an exceptionally powerful card known as Death Rex, Ryouga must do everything in his power to win so that he may discover the truth behind his past and accept what fate requires of him to do.

718 users are tracking this. Log in to see stats.

October's Badass War on Halloween MM Story: To be frank, this is a world of badass. Cards that summon monsters and shit, where if the monster gets injured, so does the summoner and none of that "punch monster, oooh! Summoner is bruised! And he's cut?!" kinda shit, this is where if a monster fucking rips the arm off of another monster, the summoner's arm gets fucking ripped off. This is card games at it's finest: Chockful of violence, blood, mutilations and shitloads of killing. None of that pussy ass hologram shit from Yu-Gi-Oh!, this is as manly as fuck. But I can't neglect how many people are fucking ripped. The majority of card users who have muscles (One guy just takes off his upperwear just to show off his manly physique before getting into a badass rumble) outweigh those who aren't ripped, even some of the well-endowed women have muscles! And let me tell you, there are more named busty babes than flatties. That, is a world of manliness. And to back it up, you can summon shotguns. Shit, reading this would make you grow another pair if you don't already have one. The plot itself I liked. Starts off with a kid crying as people are eaten and it just goes to shit, but in a good way. Not only does this kid get initiated into the higher order of badass card users, but he gets into some real badass (I cannot use this word enough, this series is just so fucking badass manly) battles and gets some real awesome shit. But that awesome shit ain't the use-it-one-episode/chapter shit, he brings it out here and there, it's strategy see? The manga uses a good amount of it. Right, plots. The why, the how, the who, all sorts of questions and shit; it's his raison d'etre for joining this orgy of blood. It does a good enough job on answering them but it looks like it was canned before actually ending instead of being a hiatus, and the ending brought up more questions. It's truly unfortunate as I would have loved to see the final manly conflict. And it's funny! Sometimes, but verbal tics, running gags, macabre humor, it's got a variety of comedies but that condiment isn't the prima donna. About half of this is pure bloody carnage with cards while it may get exausting, the sheer carnage might force you to push through until a breather chapter. Art: I thought it aged well, reminds me of older stuff but it retains enough grisly violence to make it appealing to those who can handle craploads of bloody and violent deaths. No kidding, some of the deaths I was disturbed by. It just gets frigging crazy how many people die in this and it's portrayed with inside shots, blood gushing out of wounds, dismemberment, and all in enough detail to make an impact. It may feel dated compared to the glistening buttered up stuff of today, but it still has enough style to shock and still retains the manly flair in the art alongside the concept. Characters: So many of the card-users are bastards. A majority of them are; lacking morals, killing without a qualm, fucking psychopaths or are just simply unlikable. But they are badass. Ranging from the honourable, warrior-worthy fighters to complete monsters who butcher innocents for shits and giggles to mind-raping psychopaths. But it makes it easier to cheer for the heroes. The likable ones are few, but the heroes are some of the most sympathetic characters there are. Courage, the will to change, never giving up and fight to protect the ones they care about; they have all that's needed for heroes to have. And the crap some of these characters have to go through tugged at me. Gets kinda sad how far they're pushed and even felt sympathetic for some of the non-heroes, and some of them were pretty cruel at times. Overall: If there was a category for badass manliness, I'd give it a 11. Card games do not get any manlier or violent than this outside the Chaosic Rune universe; packed to the brim with blood and innards, this is by far not for the squeamish and despite a no-ending ending, it's well worth the read if you need to man up your pansy life. 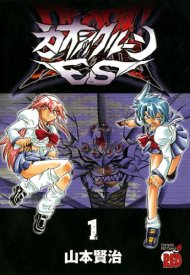