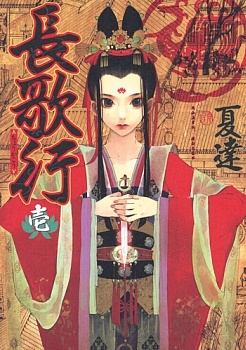 Takehiko Inoue (Slam Dunk, Vagabond, Real) is one of the greatest mangaka of all time, a true artist and writer. I believe that Xia Da is a promising young artist that is following in his path.

Chang Ge Xing (Chōkakō) feels in many ways like a young woman's take on Vagabond, the perspective is different, but her work is humane and resonates for me the same way Vagabond does. Princess Li is a wonderful character, she is flawed and immature at times, but you can't help but want her to grow.

The artwork is amazing, the story clever, the characters complex.

Musashi has his swords, The Yongning Princess Li Changge has her mind. There is less blood, less violence, with a greater focus on strategy but it shares with Vagabond an often agonizing (in a good way) search for one's place in the a violent world.

It is a manga* that I keep re-reading and have never tired of.

*  Is it a manga or is it a manhua? Xia Da is Chinese so it's a manhua. The series' primary serializer/publisher Ultra Jump is a Japanese company, so is it a manga? It's amazing, categorize it however you please.

I will never get over the fact that this manga was dropped. It still makes me sad three years later. The fact that it's not finished is the one reason I didn't rate it as 10/10.

It’s amazing. The art is good in the first couple chapters, and then turns down right jaw dropping later on.

The main character is extremely clever and talented without being so much so that she is overpowered, and this manga handles the revenge trope extremely well. The plot is pretty political and can drag a bit, but has an amazing and well rounded cast with a phenomenal romance.

The story is very interesting and fascinating since the 1st chapter. I hope Xia Da will begin writing next chapter soon. I can't wait .

The story runs like a river, it flows at times the current is strong and at times it softens, but it's movement is consistent. No panel is wasted and the narration runs in the calmest of manners. The experience of reading this was almost meditative.

Both female and male MC come in with a fantastic set of personalities embedded into one of the smartest and best executed historical political storylines I have come across so far. I am in awe of this manga and would recommend it to anyone and everyone who loves the historical genre. Not having more of it to read had left a hole in my heart which no manga has quite been able to fulfill so far.

READ IT. BUT BEWARE: THE STORY IS NOT COMPLETE AND DOESNT SEEM LIKE IT WILL BE COMPLETED ANYTIME IN THE NEAR FUTURE IF EVER (The only reason I pulled the total score down to 8 and even with this I couldn't muster the courage to pull it down any further).

ITS KINDA SAD THE STORY IS NOT FINISHED, BUT ITS A BEAUTY THAT NO ONE SHOULD MISS.

the panel where the fl showcases her strategy by drowning thousands of enemy soldiers with an apparent dry dam made me the person who i am today.