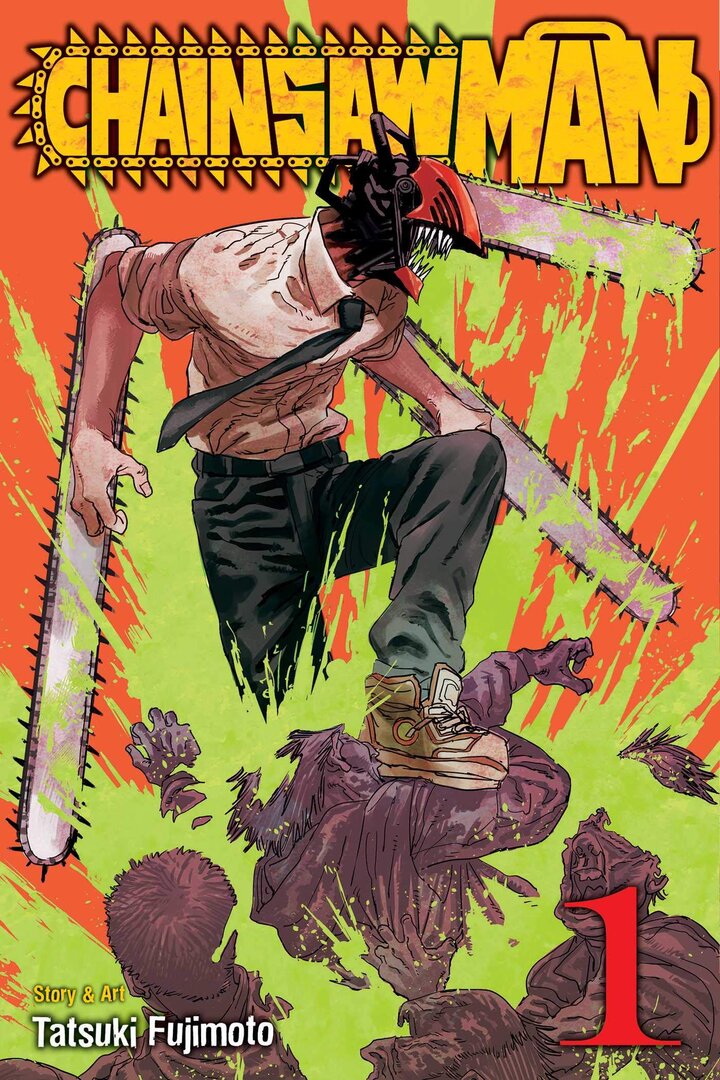 I'll be honest. This isn't a bad manga at all, in fact I think it's quite good. But people are seriously overhyping it. The main character, Denji is one of the best mcs I've seen a while in anime and manga. But the story isn't really all that. Yeah it's entertaining but it's really overrated.

The story has a good pace making it easier to binge. The author also doesn't shy away from killing off characters which is a huge plus in my opinion because one of the huge problems that the shounen genre has shown is that they don't really like to take the risk of killing a character people may really love. Eg. Fairy Tail, the author acts like they'll kill a character then BAM they magically are alive (fairy tail spoiler: one of the characters being Gajeel), or they'll easily kill off the enemy team but not really the ally team making this manga even better. The art style is also so beautiful for one of the fight scenes it wasn't only the fighting that I loved about it but it was also the art style of that fight scene making me give it a 9/10.

Ps, this was me trying so hard not to spoil it and this is my first review so I hope my review doesn't sound bad :)

Story is good but this is overrated and art I don't understand a thing that's going on in the pictures. (some time)

So I decided to buy into the hype of the manga.

With how much people were raving about it. I kind of expected more. Don't get me wrong, it did have some good points, but it did not wow me like the other manga I've read.

Why? Well the selling point of this manga was mainly the plot and art. But when I decided to sit down and read it. I was majorly disappointed.

I would have loved to have seen more character building between Denji and Pochita, before they merged. That's what first drew me in with the manga itself. That part of their friendship ended way too early. Dragging that out more and laying on plot some more would have really benefitted the plot more.

I was disappointed in the ammount of stale plot in the middle and end then. Now it was interesting enough that I completed it and don't stop reading. But I really was waiting on a wow factor. I wish it would have stopped at one manga instead of a second one. I feel like a continuation will ruin the series entirely.

The ending is okay. But I feel as a wow factor, me personally, I would have loved to have seen Denji die. As he completed the goal that was set for him as Chainsaw Man.

All in all the plot went so fast that I really didn't have enough time to absorb anything I had read or appreciate it like it could have been.

I feel like the art at some points was it's only selling point when some of the plot came up. The only reason I really pushed to continue the manga, was to reach the astronaut scene. But when I got there. I was lowkey disappointed. The art was fantastic. But there wasn't enough to the plot in that chapter that it lived up to the hype of that scene. I really expected more.

At times the art really isn't overall that great. It either goes from 20-100. At times it's really choppy and then you get scenes that look like it comes from Berserk.

The selling point of the manga is the really detailed scenes. Which I respect. They must have taken a lot of time. But I would have expected a little more consistency.

Characters like Aki, Power, and Denji had a lot of potential. I wish I would have gotten more plot on them so I could get to know them better. I feel like I was lowkey cheated.

I really didn't have enough time to build feelings and a relationship with the characters.

Don't get me wrong. I liked it. But I don't love it. The series carried a lot more potential than what it has.
I normally rate series on the ammount of tears and emotions I felt for the series. And I didn't get any of that. This manga did not give me and sort of depression. It lowkey made me sad at times. Only when Denji and Pochita died. And when Aki died. But I didn't get enough plot with them that I outright cried for them.

I would have given this series a better rating if it gave me that wow factor I'm always looking for.

I fully expect the anime's selling point to be the animation and not the plot itself.

Good read but not not enough for me to recommend or read the manga again.

The art style and character designs were the main features that drew me towards reading this manga. I find Fujimoto’s way of drawing to be very visually appealing, and it only took seeing one of the colored double-pages to cause me to research and ultimately begin reading Chainsaw Man without knowing much else about it. It may come across that I am easy to please; however, unique art styles are one of my major pulls. The intriguing synopsis was the cherry on top.

Without giving anything away, the plot was clearly well thought out with lots of twists and unexpected-yet-justified deaths that kept the story interesting. Unfortunately, the storylines were often very vague/fast-paced with how they were presented to the reader. They were hard to follow, and therefore, hard to remember. Especially during the second half of the manga, lots of happenings simply happened and were never fully (or at the very least, straight-out) explained, leaving things for the reader to interpret on their own – something that is not my strong suit. This might not be the case for everyone, but I found myself left in the dust many times during the course of reading. In fact, I will likely be rereading this manga for the sake of clarification...alongside the fact that it was simply enjoyable.

Despite unclarity, seeing the interactions between characters and their reactions to the situation were simple enough to keep me reading even if I wasn't confused. The extensive cast of characters are well-written with distinctive and recognizable personalities and appearances. It is very entertaining to see what will play out next between them all, which is a key component of any story. That, alongside the simpler aspects of the plot and well-written humor, kept me reading until the end.

Overall, Chainsaw Man is definitely worth giving a read for great characters at the very least. To me, Denji is the most relatable main character I’ve ever seen in any anime or manga. I find myself sharing his sense of humor and desires when it comes to being a teenager. Though, if you tire of sexual innuendos and crude humor quickly, this manga might not be the best choice for you. It is most frequent throughout the first few portions of the story, and is, in fact, the driving point of the plot for quite a while, but it dies down some once the story starts to get battle heavier and more intense.

Clearly, if I was able and willing to reach the end of this manga despite not fully comprehending the plot, then there must be some other draw that kept me reading. In short, Chainsaw Man is a manga that I recommend to anyone who likes things fast-paced and serious with a touch of humor throughout. I will be gladly waiting for the second arc once it is released.