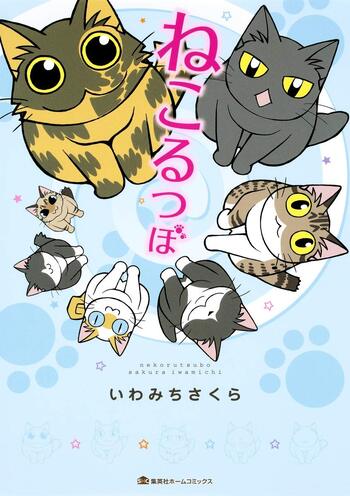 The daily life of a household that has two cats: Azuki and Daizu. Azuki and Daizu belong to an office worker in her 30s who loves cats. The owner lives with her father, mother, grandfather, and older brother, the latter of whom the cats call "Megane" (Glasses). Megane adopted a Shiba Inu dog named Mamenosuke after Mamenosuke's owner died. Mamenosuke grew up around cats so he actually thinks of himself as a cat.

A hard-working way-too-cute dog and a scary-faced but lovable cat. Living with them makes every day fun. Their owner's days are filled with laughter and sentiment. Are you a cat-lover? A dog-lover? Or both? This anime is a present for the people out there who love both dogs and cats so much they can't choose.

The manga centers on a woman who is getting on in years, but all her cats think she's a man so they call her Ojii-chan. One day a brazen cat named Tsushima appears in Ojii-chan's yard.