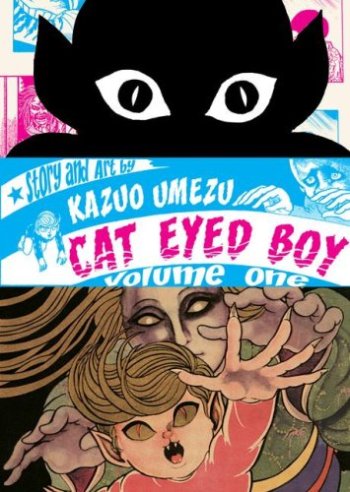 Uzumaki and Cat Eyed Boy are twisted, grotesque tales of horror that will keep you hooked from start to end. Both also have an episodic slant with a bit of consistency with the characters. HIGHLY recommended.

Drifting Classroom is Kazuo Umezu's best, while Cat Eyed Boy is his second best. Both are gruesome, violent tales of terror that you'll love - just note that TDC is way more explicit.

Okinawa was the first affected; swarms of fish with spindly legs rose from the sea, carrying with them an overpowering stench of death. Kaori and Tadashi find themselves in the midst of the incident and quickly travel to Tokyo to ask for Tadashi's scientist uncle's help - but even Tokyo isn't safe for long, and sea creatures aren't the only beings affected by the horror...

Gyo and Cat Eyed Boy are gruesome and awesome tales of terror that you'll absolutely love, with twisted artwork and genuine thrills.

A cat's-eye-view of humankind's evils, as he moves from one tormented household to another: an early collection of short stories.

Both manga feature a cat (or cat-like being) travelling from place to place, experiencing the darkness of humanity. Cat Eyed Boy is more focused on the supernatural and various creature/elements of folklore, while Black Cat is more about drama, with only the faintest hint of the supernatural. The art styles are extremely similar, as well.

The Mountain of Life is where humanity and nature gained the strength to thrive from, a mysterious land formation powered with energy to bend the very laws of nature it empowers. A tragic plane accident leads to the death of dozens of families, but eight people survived the accident. When the fateful flight crashed into the mountain, it broke apart chunks of stones that channel a life-giving force in them, bringing eight strangers back to life. When confronted with their aberrational existence, a boy and a girl are forced to make a decision that will affect their lives and that of the other reanimated individuals.

One day, Miko suddenly started seeing grotesque beings that others couldn't. Her response was not to run, not to face them, but to do everything she could to completely ignore them! Can she keep a straight face and continue her day-to-day life while surrounded by horrifying monsters?