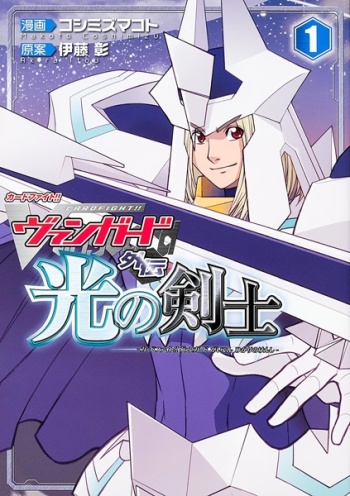 If you're looking for anime similar to Cardfight!! Vanguard Gaiden: Hikari no Kenshi, you might like these titles.

Now, in the modern age, the creator of the unvierse, Majin, has revived suddenly. At the same time, visitors from the darkness have descended to Earth. As danger nears the Earth, three men pursue a young boy. “Is he a match? Could he really be humanity's last hope?"

Welcome to the game of Live On! In it, people known as Cardlivers use collectible cards to summon mysterious creatures for battles. One such Cardliver is Kakeru, an elementary school student who wants nothing more than to beat his friend Ai in a game. During a stroll through a park Kakeru runs across a hurt puppy named Petal and, using a card that it gives to him, transforms into a wondrous wolf and defeats the dog's would-be and sinister captors. Alongside Petal, Kakeru sets forth with his new cards to become the best Live On player around!