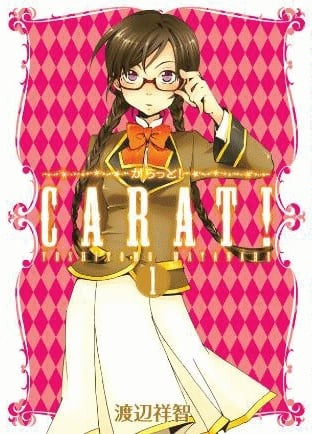 Protagonist Shurutsu Kenichi, caught up in his cousin's machinations, debuts as a “female middle school student” idol “Neushwanstein Sakurako” even though he's a boy. Fighting alchemists' evil plots and being an idol makes for a really busy life!!

Kaito Odagiri is a normal fifth grade boy who can hold his own in a fight and loves to show off. This attracts the attention of Makoto Kaibara, a boy at Kaito's school who reveals to him that he can use magic, but he needs Kaito's help to protect the peace of their town. Kaito jumps at the chance of being a magic-wielding superhero, but his excitement turns to horror when he realizes that he'll be protecting the town dressed as a typical magical girl under the name Thrilling Pink. Although initially reluctant, Kaito soon discovers that there's more to being a magical boy than simply looking cute in a skirt.

A humorous short about a boy who transforms into a girl to save the world.

A 15 year old newbie idol is in love with her best friend’s brother who is also a popular idol. But she runs into a scary yakuza guy and finds out her mother was an ex-magical girl. Her love interest gets kidnapped by demons that look like burly men with cute squirrel heads. So she contracts the yakuza to become a magical girl, which means she turns into a handsome guy in a magical girl outfit. And her love interest shows an attraction towards her magical guy form? But her best friend (her love interest’s sister) turns out to be in love with her and later also becomes a magical crossdressing guy to save her life.

Ayumu was murdered by a serial killer – at least, he was. For after the mysterious Eucliwood Hellsythe revives him, he changes from a human to a zombie, much to his dismay. Now, in addition to being unable to die, Ayumu must see to the whims of his supernatural, silent companion – but things continue to get worse from there. As once Ayumu accidentally steals a magical girl named Haruna's powers, he is tasked with the embarrassing, obnoxious task of being a magical girl – err, boy– in her stead! Then with the addition of a hostile vampire ninja to his household, can Ayumu manage to maintain his new home life, fight against attacking monsters, and track down the person who killed him all while attempting to keep what little dignity he has left in tact?

Ayumu Mikoshiba is a boy in junior high whose family runs an old shrine with few worshipers. In an effort to revive the shrine, Ayumu's parents decide he'll be the next in a long line of magical girls in the Mikoshiba family. Together with Fuu-chan, a small fox-like mascot character, Ayumu tries to help people while cross-dressing.

Karin is your lovable girl-next-door type–if the girl next door also happens to be a goddess! Karin has a magic ring that gives her the power to do anything she’d like. What she’d like most, though, is to live happily ever after with Kazune, the boy of her dreams. Magic brought Kazune to her, but it also has a way of complicating things. It’s not easy to be a goddess and a girl in love!

Ever since Joujiro was a little boy, he dreamed of becoming an ally of justice. One day, he meets Felvieno, a otherworldly being who owns a dimension-drifting shop of wish-granting items. Once Joujiro enters Felvieno's shop (which had taken the place of Joujiro's bathroom), Felvino offers him "whichever item he desires". Upon hearing that Joujiro wanted to become an ally of justice (after he practically threatened to kill him if he didn't take something.), Felvieno granted him a transformation bracelet. However, much to Joujiro's horror, the transformation bracelet turns him into a magical CATGIRL... Complete with boobs.