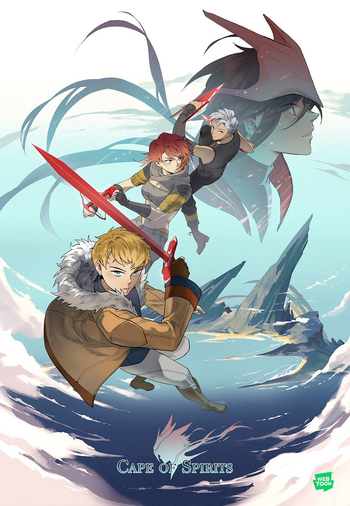 Cape of Spirits is a short action & sci-fi webtoon that follows Jinsei an ex-prince who is on the run. To clear his name & to save the world he teams up with a group of mischief. Friends became foe & foes became friends as he tries to save his only family and the world.
Together can they save the world from being destroyed?

The story starts in the middle of the climax and that was such a genius move from the author's side as from the very first chapter you are hooked. It does explain what happens before the climax with flashbacks. And those flashbacks are short and in between the part of the chapters as it was entwined in the story. It had such smooth transitions. So satisfying to read. Once you get past the first few chapters - which does feel a little confusing cause the story starts from the middle. But if you just go through the first 10 chapters, you can't stop.
Another thing about the writing that I have to mention is how the author didn't coined the characters of their sexuality. There are LGBT characters but it isn't used as an excuse to turn the story into something else. At its core, Cape Of Spirits is an action, sci-fi, and fantasy story. Characters weren't part of the LGBT umbrella for the plot. It was who they were. They being in love with each other was just them being them. Loved that!

The art is absolutely gorgeous. The colors are bright and the action scenes have a good flow.
The last chapter made all the readers teared up...

Little tip. The story starts from as I said in the climax. So if you feel like you missed something or don't understand then read chapter 6 part 6 of Fictional Skin-canvas- by the author. The premise/what lead to Cape Of Spirits is explained there without any spoilers.
Also, check out Fictional Skin too while you are there. It is good!

Everyone has their tastes, preferences, and ideals. I actually don't know why I said that, but I only got one thing to say. Actually two. One: I'm very picky when it comes to art. Two: The art was a major turn off.