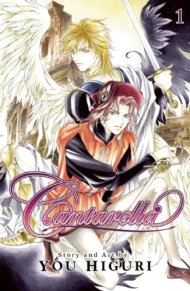 From birth, Cesare Borgia is surrounded by shadows. Damned by his own father, hated by his closest brother, separated from the sister who loves him, and driven by the demons of Hell itself, his quest for power threatens to set the world of Renaissance Italy ablaze -- unless one innocent person can drive away the poisonous shadows ravaging him!Enter the world of the Borgias. A world of unspeakable conspiracies and forbidden desires. A family whose murderous intrigues would make them infamous throughout history. A history written in blood…and a poison called Cantarella.

612 users are tracking this. Log in to see stats.

What the... where exactly is the ending?? =.=* I've done some research online after finishing the 22nd page of chapter 40 (online), and guess what I've found... no more scanlations!! >:O If there's anything I hate, it's when the scanlators cut you short on the ending of one of your favourite manga. And it was just getting good too, with SPOILER!!-The Borgia family reunion being organized by Cesare at the Vatican to unravel his plans for further unification of Italy and the position of the family in all of that; and before the epic collision Cesare vs. Chiaro on the battlefield!!! TT^TT-SPOILER!! In Japan, there's a total of 12 volumes and 48 chapters, so why can't I find them online?? Any ideas?? Yeah, I blame the scanlators and the cursed copyrights. >.<* (and why does it say here on AP that there's only 10 volumes? Oh, the mystery... -_-') Anyways, let me get to the real review now that I've said what I wanted [the above also serves as a warning to those who are that unlucky - like myself - to be forced to read scanlations online because their country's government does a poor job at entertaining its people or are too poor (or thrifty) to buy the books (if they're already lucky enough to have them sold in their country! X'O)]. MANGA INDUSTRY IS BUSYNESS OF INTERNATIONAL PROPORTIONS! >o< IT SADDENS ME AT TIMES!! REVIEW: The story occurs, roughly said, during the rule of Pope Alexander VI (for details, consult Wikipedia, since there's no way that I'd be good at history, sadly enough). During the read, you can clearly tell that the story of the manga itself has only used the historical facts as a skelleton for a pure fictional creation. That being said, I was truly intrigued by the amount of work that could be sensed from the manga itself - from the style and the vigorous prose of the dialog, the reader feels that the 'skelleton' was really perfected before building the fictional story ontop of it, the way it is known today, in its final form. However, the historical facts are not the main focus  - that are its characters, which also originated from real historical figures, but, given the writers' freedom to do just about whatever they want (this refers to all writers of the world, that's why it's plural), they have been characterized rather... well, fantastically is the only word that comes to mind. At times even, the manga-ka might've used too much of her writer's freedom to portray some characters, causing them to be really eccentric and simply not fit to the era the plot is set in. Nevertheless, you can't deny that the manga-ka tried really hard to understand the complex politics of Italy at the time, and that she put a lot of effort into her main characters' development at the very least (in the end, it is partly a shojo manga, so some illogical fanservice or nonsence that the less important or girl characters spurt out can be forgiven.....probably). As for the art and the dialog style, I really can't complain - a lot of bishis of both genders and the typical hierarchy of beauty depending on importance of the character - meaning that naturally, the main character is the most gorgeous, followed by his best friend, sister, some more important underlings, then after that some more important characters that appear later in the plot, and at the bottom of the beauty hierarchical pyramid, the so-called 'one-use-only commodity characters' (a.k.a. the characters that often appear in great numbers, usually as  a gang or an army of some sort, just to be wiped out by the main or supporting character during battle or while escaping, or as fangirls that can't help 'whispering' among themselves how the main character is handsome - name given by my sis). Also, the beauty hierarchal pyramid also includes badguys being ugly as well, with exceptions of characters who are there to decieve at first sight or are forced to do bad deeds by their situation, company or fate. The dialog, on the other hand, has a tone of nobility to it and is often written poetically - which is, considering Cantarella being a historical manga (about 1/4 of it, anyways), a good thing, desirable even. To conclude, if you were hoping to read about history, you'd be greatly disappointed - Cantarella tells of betrayal, honor, destiny, friendship, romance, passion, desire, (in)humanity, and very very little of politics, wars and army - basically just as much as it's needed to know that the plot is actually happening in our pretty blue planet's history (but not really, since 95% of it is pure fiction). Cantarella can be viewed as a fanfiction of some sorts as well - a fanfiction to make history more entertaining, perhaps. Either way, it's definitely interesting and draws attention - after you start reading, it's all up to you whether you like it or not, so I won't even bother telling you why you should think it good or bad. Instead I'm just going to say that I recommend you give it a try and judge for yourself - after all, the best judgement is your own. :D