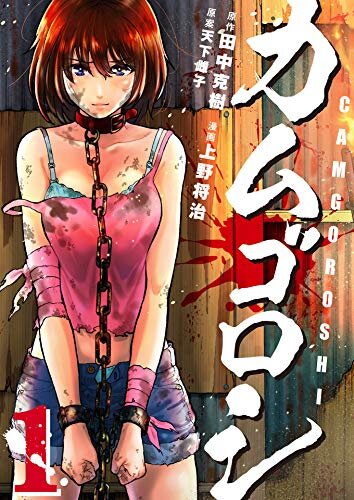 Akira is in the midst of the final battle between the human race and vampires. He only has 47 days until Japan is turned into an island of vampires.

Set before the events of Kichikujima, Alice is a model who's been hired for a photoshoot on the isolated and idyllic Kichiku Island. But soon into the shoot, she and the crew encounter strange children wearing animal heads as masks and head into town to investigate. The bloodbath starts when the group meets the now 10-year-old Mari and her brothers. And unfortunately for Alice, the pig mask-wearing Kaoru believes that she's their missing mother, and will stop at nothing to keep her for his own.

“In 8 years, when you’re all 23, there will be a meteor shower that only happens once every thousand years. They say that if you make a wish on them, it will come true!” – and indeed 8 years after graduation the students got back together to climb the Hoshimi Mountains for the best view of the meteor shower. This reunion though is really not going as planned as all these long-lost friends have all their own secrets…

At the end of the '90s, a group of biologists commissioned by a pharmaceutical company explore an island in the South Pacific, seeking new genetic resources. They soon stumble upon a horrifying massacre committed by a mysterious entity…

It's said that on a prohibited island called "Dragon's Beak" the "power of the gods" resides. Anyone who obtains the power will have all their wishes fulfilled.

Katsuragi Shiho casually handed her house key to Shikibu before leaving her hometown. After not returning on the third day as she had promised, Shikibu probes around and finds a lead that brings him to "Yasha Island". However, the strange rituals being held on the island, Shikibu's investigation records getting stolen, and finding Katsuragi's name in the house of blood among other mysterious occurences all point to Katsuragi having vanished into thin air! Shikibu is bent on finding out the truth, but the islanders all seem to have been silenced by somebody...?!

Miro Takizawa was born and raised on the peaceful island of Sasaraijima, an island surrounded by mountains and ocean. This introverted girl has lived her first year in high school peacefully, falling in love and trying to make friends. Her peaceful life takes a sharp turn for the worse as she discovers the secrets of the "Tetsumin." Dark secrets await her as these horrific entities endanger the inhabitants of this once peaceful island.

Seven girls who have no memory of their past or even their name lives on this island. Both the town and island are deserted but water and food are supplied to them each month. The girls call each other by numbers and names associated with the number. Number 6, Mutsuka is a girl desperately trying to get back to her beloved sempai. She has tried 16 times but she won't give up until she succeed. In her attempts she'll learn about the other inhabitants and about the island and not all of it are pleasant.

An isolated island surrounded by fish demons and a population of warring vampires and humans. Ryousuke, his girlfriend Kazumi, and his friend Yamaoka are shipwrecked by the fish demons and wash up on the shore of this cursed island. They soon encounter the inhuman cruelty of the vampires first hand, before Ryousuke is able to meet up with the human resistance. Ryousuke wants nothing more than to escape the island, but mainland Japan may not be safe for long. If the humans don't defeat the vampires soon, then the vampires will succeed in their plans to spread the virus to the mainland.

Yuushi Kamome is a freelance writer who lost his beloved daughter in an accident. In despair, his wife leaves him, and he spends his days like a shell of a man. One day, however, a flyer from a strange religious group, the "Heart Laughing Society," changes his fate. It shows the image of his wife, whom he has lost touch with...