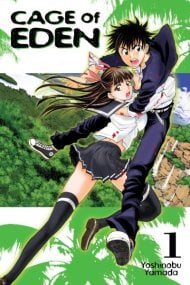 Akira Sengoku and his class were traveling home from a field trip aboard Flight 357 when the plane mysteriously crashed, leaving them stranded on a hostile, prehistoric island. In this place, extinct and colossal animals run wild, quickly devouring many of the survivors and leaving the rest to fight for their lives. Alongside his childhood friend Rion and other classmates, Akira will struggle to survive in this impossible place against all odds.

Story: You know, I can't believe it ended. It left so much open, so many threads untied and loose. So many things missing, so many questions left unanswered and yet, it answered some of the most important of them all, and to it's benefit in a good pace. And why, is this guy talking about the ending right at the start? Because you already know deep down that a dumbass manga like this, chockful of fanservice, ridiculous events, hot-blooded hammy speeches and action, can never, ever, EVER hope to achieve a satisfying conclusion. It's the nature of things. But damn a nice plot it doth threads. Kids on a plane, with a hot steward and most of said kids buxom and bouncy, with ten, twenty, shitload of other bodies and bam! Plane crashes. It's all, disaster and shit until HOLY SHITSAURUS IT'S FUCKING EATING PEOPLE and then it just immediately sheds any sense of reason and decency for high-octane thrills, heroics and fanservice. I mean the premise is pretty neat with the disaster and island survival thing (To be fair, it's probably a cliche premise but love my survival manga) but as it progresses, it gets more interesting and has more depth than you would initially suspect. Seriously, plot! I don't mean plots plot, all boobs and no sensible plot of any kind, but plot plot. It's pretty good considering all the other mentionables and everything I couldn't mention for fear of spoilers but it goes against most reason for it to be anything but an excuse for boobs in the jungle and wild animals with a taste for human flesh. You wouldn't be surprised but with the animals, comes a train of... well, think of it as a periodical ass slapping. It comes one after the other and this goes hand to ass with all the events that befall Akira and his group. Sure it leads to chapters upon chapters of action, but it gets so ridiculous how anti-Akira the island is that it's even lampshaded a few times. Which was hilarious, maybe unintentionally so. The unanswered questions in contrast to the fun factor, the principal of screwing the MC over whenever possible, leans towards the latter and while it may provide answers slowly, it still provides a fair share of them. Things may become cliche or "the usual" as things progress and predictions may come true, it still doesn't mean it isn't fun. And logic, incredibly enough, is still prevalent. Sort of, but not even logic can trump pointless bathing scenes. Art: I do believe it improved over time. I usually don't have much to say for art in stuff like this apart from the usual pervy things so I'll keep it simple: It looks good, they are stacked, others are really stacked, clothes are impeccably clean, no lasting scars, animals look good... Know what? Art's good. Gets pretty awesome in places but it's definitely on the attractive side overall. Characters: Well... boobs. I have to get this out of the way, for this part at least. Mammaries from nicely sized to damn big for a teenager to eye-poppers. But these buxom dames aren't just for show, we get background info! I know this sounds crazy, but we get to learn a bit about them, more than their names and in one certain chapter, a perv's thoughts on some of them. It sure is classy. Don't have much to say about them but the guys are handled a bit better. Akira is your usual, tough-as-nails badass MC of a shounen manga. He has it all, from the hot-blooded speeches to his ability to take blow upon blow and this guy can lead! He can enthrall! He can envigorate- encourage, and etc. Still a pretty cool guy but the real seller is Zaji, who is just plain awesome. He's a cooler guy, smart sometimes and muscle in others and fun. Backstory too. And a lot of these characters (The teens on the class trip) have their past intertwined with each other, childhood and friendships forged from days long passed. Chemistry, history, and there is a boat load of characters. I'm going to gloss over them, skip a few from a few dozen chapters in and get down to two others: Badass and Hades. Badass I can't remember the name of, despite his prominence in plot growing as the tale goes on. I really should remember but this guy, everything he does is badass. If I told you of all the badass things he's done, it would be all that he's done and you know what? Backstory as well. For a badass no less! Usually badass is enough but they flesh him out and make him more human, which is some major kudos. Hades, he's a fan favorite (Or so I believe), he's awesome as fuck. He presents an opposite to Akira, opposite of ideals and arguably the black to his white. Not much else to say about him but he is a favorite of mine and overall, the manga did a way better job on characters than it should have, once again basing it on the genres it partakes in and all the action and fanservice it has. Overall: Not enough time to talk about a few of the other stuff; from enemies among man, more on the actual plot and to thread that thin line of actually being helpful without spoiling too much, more on the faults of falling into a formula, chapter cliffhangers and at times long dialogue but as predictable as it may be, it throws a mean curveball now and then that I didn't see coming. It's not a series for the ages but the characters have chemistry, the action is fast and plentiful, pointless fanservice aplenty and the best part of all, it's fun. 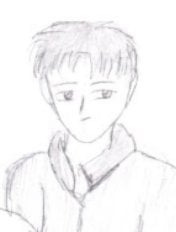 my first review!!!! i choose this manga as my first review since i was in charge of translating a few chapters (most noticablly chapter 105) anyway, that's enough advertising :P, let's get on with the review i thought the story at the beginning is a bit crap... since it seems like a rip off of LOST, and repeat itself quite alot. but then from chapter 100 onwards the story took a deep dive and introduced more elements of mystery, especially, the truth behind the island they stranded on. normally i would give it a 6/10, but im being a bit biased here coz i really like survival mangas. i thought the art were top class, and that's the end for art review :P moving on to characters, the character traits, i thought are pretty good even though they are a bit cliche- a couragous kid as a leader, a super clever kid, a semi-tsundere girl who's gonna get on with the main character, a girl who's a master at martial arts, a useless gril with big boobs... i shalln't go on. and the character relationships i thought was spot on. now i would give examples, but then i wont be able to stop, and dont wanna spoiler the story too much for someone that's not up to date. so overall, a 8/10 and a great series to work on

If you haven't read it start reading it. Cage of Eden is by far one of the best ongoing manga today and combines some of the best genres into an beautifully put together masterpiece. Panty shots, loli, horror, tragedy, intense violence, adventure, romance, psychological, mystery, giant extinct animals, and perseverance describes what this manga is all about. Cage of Eden centers around a young teen named Akira Sengoku and his classmates who returning home from a trip to Guam. The plane he, his classmates and others are on board soon crash land on a mysterious island which is inhabited by prehistoric animals that are supposed to be extinct. Sengoku and his group of survivors are now stuck on this island and have to find a way off before they end eaten by one of the extinct prehistoric creatures that inhabit the island or end up killed by other passengers. Along the way, he and his group also attempt to find the answers to this mysterious island, including figuring out how and why these animals that are supposed to be extinct are now alive. Cage of Eden has an incredible story line and the suspense created from the island's mysteries as well as Sengoku and his allies' attempt at survival keeps you coming back, having you want to read more and more. True that the large amount of fanservice in the beginning can be a little overbearing but it simmers down as the story goes along (not to say that I don't enjoy the fanservice). One of the most intriguing things about Cage of Eden is the reality in it (minus the extinct prehistoric animals), as it shows the depth of human behavior including both the good and the bad of humanity. During the first few days the plane crash survivors spend on the island, you see what would be expected of most people in such a situation, but as time goes on, the survivors tend to become used to their condition and adapt as would most likely be true in reality. Unlike some mangas where the characters are automatically adapt to the situation right from the beginning or stay frightened and helpless all the way through, Cage of Eden gives a true sense of human behavior, emotion and thinking giving the entire manga a in depth look into humans in general. Cage of Eden is definitely an incredible manga and is long overdue for an anime. I hope you will also read this manga soon and agree with me.