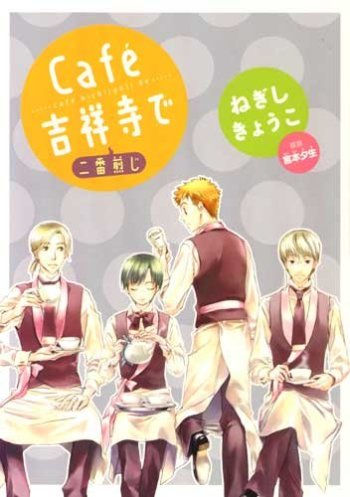 If you're looking for manga similar to Café Kichijoji de - Niban Senji, you might like these titles.

Azuma is a skilled French chef working at a top-notch hotel. One day, he's requested to offer his culinary skills at a shop he frequents. Not only are the customers varied of age and profession, but some regular patrons have quite the demand too! Furthermore, a love story instead of a dessert order?! By way of declining the strange request, Azuma inadvertently revealed that he's gay! In addition to that, the editor Kumoi is also having a long-distance lover's tiff here!

To help with his family finances, Higashida Daisuke decided to work part-time at a family restaurant. Working there however is a chef with no sense of cooking, a co-worker who solves their problems with money, etc. There is absolutely not one normal person working at the restaurant!

Tomaru Harukaze is extremely shy and terrible with any kind of social interaction. His worried mother sends him to live with his grandparents in the countryside—born and raised in Tokyo, Harukaze worries he'll have trouble adjusting, but that's not the worst part: he will be starting a part-time job at Restaurant Bell, where his grandmother is a regular customer! Not only will he have to learn to interact with customers, but he'll also have to learn to get along with his quirky coworkers.

"Rabbits, rabbits!♪" Cocoa sang as she entered the café "Rabbit House."Little did she know that she would spend the next few years of her life there. Follow Cocoa as she makes friends with the quiet and blunt Chino, the strict yet kind military buff Rize, the calm and gentle Chiya, and the elegant yet down-to-earth Syaro!