By the Grace of the Gods - Reviews 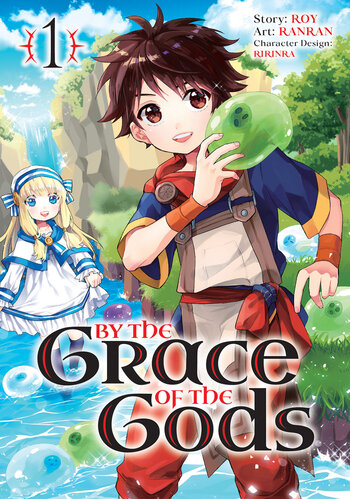 This manga is your typical Isekai manga, a man died and was 'reborn' into a world full of magic. Despite this, the manga distinguishes itself from typical in many different ways.

First, the story. Though simple in concept, it continues to be entertaining throughout the chapters. It's basically just a man is reborn as a child and meets people while trying to enjoy life, HOWEVER, from this point on it becomes different than the 'typical' isekai manga. While, theoretically the mc is op, the manga handles it well instead of being your typical uninteresting 'mc can kill everything'.

The characters themselves are entirely enjoyable, it's lovely to see a manga handle both the reactions and feelings of characters with care, unlike many out there. The characters are each unique and have their ups and downs. The mc is often treated as a part of their family, which is completely wholesome to me.

The mc himself is a very interesting character, the way the manga handles him feels as if he is real and allows the reader to connect to him more then the average mc. While op, the mc's sole interest is to enjoy the new world, while studying slimes of course. He himself has had a bad past, something that strikes me as strangley unique in mangas, while it is not a rare situation for the mc to be in, it often doesn't affect their interactions or thoughts towards others. Our mc here is influenced by his past both emotionally and mentally. His personality is lovely, a complete change from your typical badass mc (even though they are amazing too), honestly he is a cinammon roll from the very start.

The art, story and characters makes this an interesting read, well worth your time if it's the type of manga you like. I would recommend it if you are at all interested in fantasy or soft manga. (By this I mean not fast paced and action packed.) It holds your attention and interest purely based on the characters and their development, with the occasional monster fight of course.

In my personal view, the best part of this is mc's infatuation with slimes. All of the slimes are adorable and so unique to what other mangas often portray them as. Along with this, the mc's reactions to the slimes is simply adorable.

The manga is a light-hearted type of manga, perfect for people who are either looking for something more relaxed, just getting into iskeai type mangas or even if it's one of your first manga!

With that said, i'll end my review here. Hope you enjoy the manga if you decide to read it!

It just gets worse. Dull and (hopefully) unintentionally creepy.

There's no day to day challenge and the focus has shifted into some weird plot (which is the only plot in sight) where the main character, who is mentally in his 40's as you'll be reminded occasionally, is sort of... I guess, falling for this 11 year old (drawn like she's 6) or at the very least hanging out gazing into each other's eyes all day. Garfield has a more challenging, exciting, and potentially less problematic life.

This is another manga that makes you wonder why they gave the MC so many superpowers if they never intend to push him anywhere near his limits. Does he need superman levels of power if he has slimes do what little fighting (or work) that's in the comic and oh yeah, his main activity is running a laundromat. This is a boring manga that got sidetracked into an even more boring manga. You'll pray to the gods that he goes back to running his fantasy laundromat.

While it may just seem like another typcal isekai. In my opinion its completely different from most. The mc goes through the story making friends and building a reputation, it has good world building as well as a "feel good" aspect throughout. If you are bored of the average isekai trash then this is a must read, its unique and the concept is well executed. Very good

The aura of this manga is "feelgood." We have shimmery, wispy panels; constant smiling blushface; humility; polite consideration and people generally loving and respecting each other. Ryoma starts out living alone, but then meets a noble family that wants to take fem in and help support fem out of the goodness of their pure hearts. It's pretty adorable how they assume that fe's lived through horrible traumas because of some of the stuff fe says. Fe also meets quite a few other people, most of whom treat fem with friendliness and fawning amazement at feir overpowered skills and innovative knowledge. The skills come from the gods wanting to spoil fem because they find fem to be such a good and lovable person, and feir knowledge partially comes from fem just living with slimes and learning about them and partially comes from fem having the mind of a middle-aged man from Earth. Fe joins the Tamer's Guild, the Adventurer's Guild, and the Merchant Guild. Most of the plotlines involve Ryoma using slimes in innovative ways, showing off some of the new varieties of slimes fe has discovered. Fe does a few cleaning jobs, helps out with some monster extermination, and decides to open up a laundromat. Fe's worried about things coming to fem too easily and how that might eventually lead to fem becoming spoiled and becoming a worse person, so fe tries to take steps to maintain a proper down-to-earth attitude and work ethic.