Alt title: Because I've Been Reincarnated as the Piggy Duke, This Time I Will Say I Like You 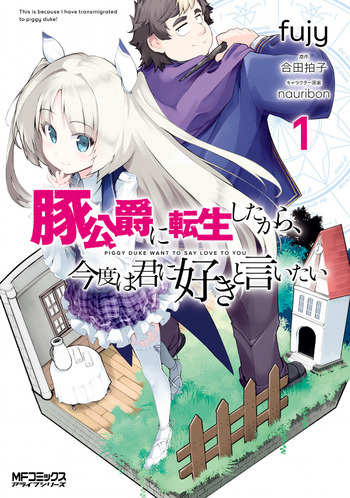 If you're looking for manga similar to Buta Koushaku ni Tensei shita kara, Kondo wa Kimi ni Suki to Iitai, you might like these titles.

Reasons you might like My Next Life as a Villainess: All Routes Lead to Doom! Comic Anthology...

Almost the exact same premise. Only difference being one is an anime and the other is a manga. Both Protagonists are transported into their favorite piece of media, only they take over the role of the antagonist, making sure to not fall into the bad ending that awaits them.

The manga follows Wendelin's life as a child, and features stories that are not in the novels' main manga adaptation

The main character is reborn as a character from a game he played in his previous life. He falls into ruin along with the villainess, spending the last of their years together. A man named Kururi Helan. No details of this decline is written inside the game, it can’t be understood why this sub-character ended up with the villainess route. However, that is of no importance. Living as a needy farmer along with someone is unpleasant, so the main character seeks a profession. For now, he aims for becoming a blacksmith as he originally had skill in it.

After being reincarnated, Ars Louvent is supposed to live in a different world as a weak aristocrat. Both his physical strength and intelligence were mediocre in both worlds, but here he naturally possessed a skill called "Appraisal" that allowed him to see the potential of any person. By gathering talented people by his side, Ars uses this "Appraisal" skill to transform his weak territory into the strongest one! But the road ahead of him won't be so simple.

A normal office worker, Toru Minasuki, was swallowed up by a dimensional fissure and reincarnated into a different world. Upon reincarnation, Toru was given a skill board by God. Make the most of it to acquire all the necessary skills! Even though he is an "inferior person", he'll make his way to the top!

A girl who regrets dying without being filial to her parents, she wishes that in her next life that she will have a body that is invincible. God decides to grant her that wish, she awakes suddenly in the body of a baby... Could this be reincarnation?

One day, I realized that I, a former Japanese, had reincarnated into a different world as Cristea Ellisfeed, a Duke’s daughter. Reincarnation…? Duke’s daughter…? A world with magic…? Is this a light novel!?!? I received the reality while being confused. However… I’m dissatisfied with this! This full course is somewhat dissatisfying! Sweetd - only sweets! I’m sick of it already!! The taste of commoners, please!!