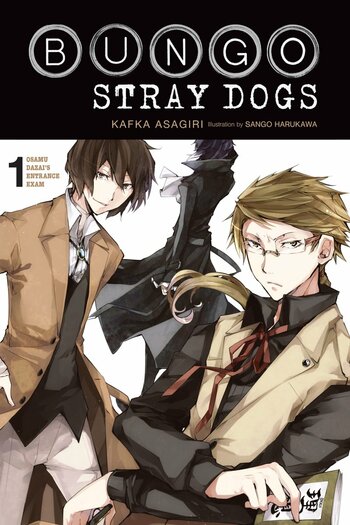 The Bungo Stray Dogs light novels are a group of stories not in the manga. (Although a few have manga adaptions)

🎇Thus far, Yen Press has eight of the ten novels translated to English.🎇

Book Three: The Untold Origins of the Detective Agency (English/Japanese)

Book Four: Gaiden: Ayatsuji Yukito VS. Kyōgoku Natsuhiko (Japanese, not yet translated) It also has a manga adaption in English, Bungo Stray Dogs: Another Story.

Bungo Stray Dogs the Light Novel, is (according to the Wiki Fandom page) also counted as another light novel, but if they publish more than one, that would be another series. It adapts the anime. If the novels catch on that would be about ten books. So far it is only Japanese.

Since A-P does not list these titles separately, this review will have to combine my thoughts on the titles I have read.

Told from Kunikida Doppo's POV, we learn how Dazai became an employee of the Armed Detective Agency while they solve a murder case.

Osamu Dazai and the Dark Era

This review will be updated later. 😄

The art is awesome but i think fight scenes are terrible. This manga is just a bunch of unrealistic fight scenes and characters with mental disorders.