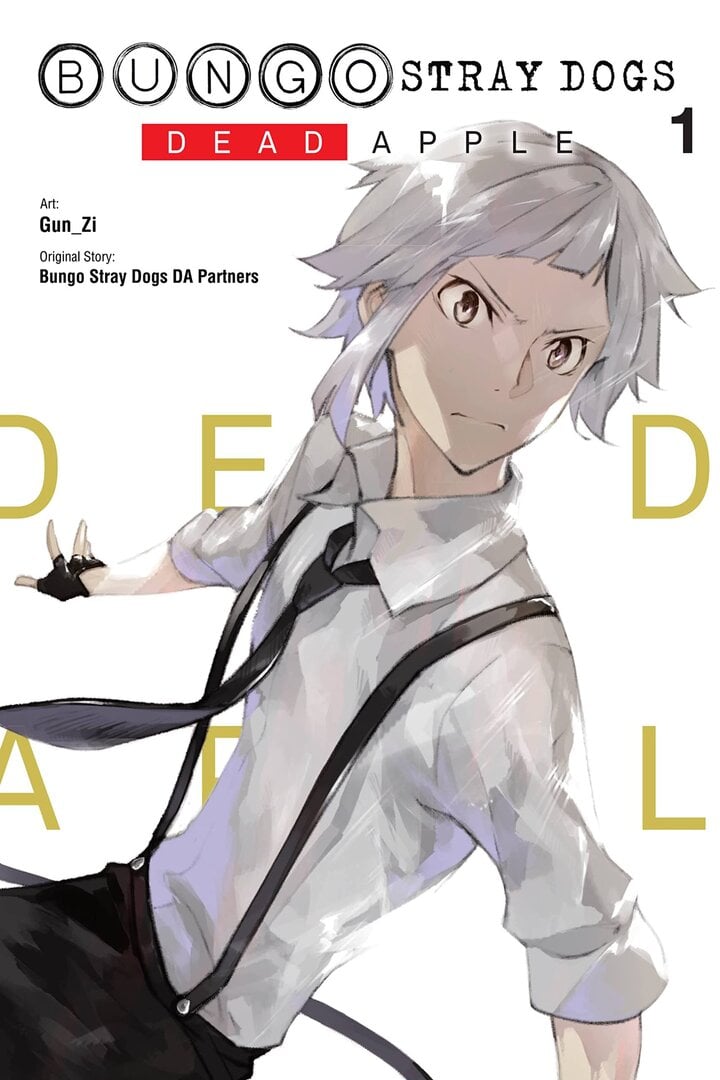 If you're looking for manga similar to Bungou Stray Dogs: Dead Apple, you might like these titles.

In the Tokyo of the future, a second Japanese bubble economy propels the city into a feeding frenzy of desire. It's in this seedy world that Saiga, a photojournalist and war photographer infiltrates the shadowy secret world of the Roppongi Club and Kagura, a young girl and modern goddess who's touch transforms Saiga into the Speed Grapher, a man with the supernatural ability to make anything and anyone he photographs explode. And that's just the beginning.

Yatogami Kuroh has lost the only thing remotely close to family he had left—and to make matters worse, he’s been charged with a final task by his master that he isn’t entirely sure he’ll be able to fulfill. Follow this young modern-era samurai as he sets off on a quest to track down the next Colorless King and determine if he’s evil or not…and to strike him down where he stands if he is.

While vacationing on the moon, Albert, a young Parisian nobleman, meets the Count of Monte Cristo, a fabulously rich aristocrat from the far reaches of the galaxy. Fascinated by the count’s sophistication and intelligence, Albert is unaware of the older man’s dark purpose: to enact revenge for a terrible act of betrayal committed against him twenty-five years ago. Soon, all of Paris, including Albert’s own mother and father, will feel the terror of the count’s vengeance.

The story takes place in a world where seven people with unusual powers are crowned as "kings," and revolves around the "bonds" and "fate" between the people involved.

Talented art student Eiri works part time at an antique store, where many of the items on sale are said to 'have a story behind them'. Recently, he has been having visions of a beautiful yet sad-looking young girl named Cossette. These visions lead him to the stock room, where he finds an unfinished painting of the girl. The former owners of the painting all died in bizarre ways, and according to Cossette it is only one of many of her former belongings - belongings that remember her, that bind her to this Earth, that will continue to drive people mad. That is, unless Eiri can save Cossette from her eternal suffering...

Four students of the same age have nothing in common except that they attend the same elite New York City school. Kate, Rose, Clare and Rachel all belong to different cliques and hardly notice each other's existence. Then one day they gain something in common, something very important, something mysterious. They find themselves drawn together by the death of a fellow student and the secret of their own missing memories. Suddenly they are thrown into a world of hidden warfare on the city streets and are caught up in secrets which would not be believed by others. These four all have their own problems to struggle with, things that seem more important than such strange conflicts. Can they escape from this fate? The only thing they know is that despite coming from four different worlds they now have to rely on each other or die without a hope.