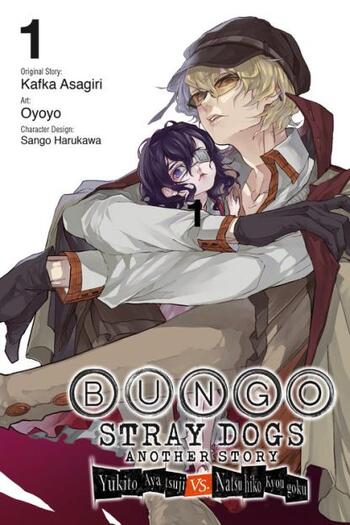 "Whether the target is on the other side of the world or wields enough skill to kill God, it doesn't matter."

Yukito Ayatsuji is a know-it-all in knickerbockers.

He likes cats, ball-jointed dolls, and a good smoke. He'll even put his shades on his cat. Though he looks harmless, he is a very dangerous man. His body count has earned him a spot on the governments list of Extremely Dangerous Ability Users.

His ability Another, allows him to see through a criminal, and once he identifies the perpetrator, the murderer will die in a "accident." His ability solved 50,000 cases and has killed two billion people.

Mizuki Tsujimura's seen a few too many action movies and aspires to be a great agent. Ability: Yesterday's Shadow Tag. As an agent for the Special Division for Unusual Powers, her job is to oversee the eccentric detective, or try to at least.

Together they hunt down a manipulative, vile murderer who somehow escaped the judgement of Ayatsuji's ability.

Written by Kafka Asagiri, designed by Sango Harukawa, and illustrated by Oyoyo, this manga feels like a step up in the BSD universe.

This is a very good manga series. I wanted to read everything in the BSD world, so I checked this out from my library without much knowledge about the story or characters. I was pleasently surprised by the art and the creepy, intimately dark feel of the story.

This is a must read for any fan of the main series. It's grittier, darker, and fast paced. I really wish this series was longer. If it was, it would be cool if it ran parallel to the main manga series Bungo Stray Dogs. I'd love to see Ranpo meet Ayatsuji.

And for those who are curious about the girl who sees Chuya off the back of the cargo plane in Dead Apple, it's this very same agent, Mizuki Tsujimura.

As with most of the characters in Bungo Stray Dogs, Yukito Ayatsuji is based on real life author Yukito Ayatsuji, creator of the horror novel Another. It has been adapted into manga, anime, and a live action Japanese movie.

I haven't read the manga yet, nor have I watched the movie, but I do recommend Another the anime for those who like a slow-build, bloody mystery.