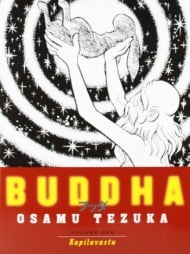 The time is several millennia ago; the place is India. Droughts and famine plague the country, and its people are forced into a strict caste system that rewards only the elite cream of the crop. Across the land animals and Brahmin alike rejoice, for the blessed child with a birthright to become a god is about to be born. His name is Siddhartha Gautama, later to be known as the Buddha. However, Siddhartha's life will not be an easy one. He will experience love and loss, learn about the value of life and influence the lives of many, including Tatta and Pariah, Bandaka the bandit and countless others.

Story: 'Epic' is a word which has been appropriated by our modern times to mean anything which is beyond great, something which not only exceeds our expectations but shatters them, leaving an impression which remains with us long after the initial experience. In other words: something truly awesome. Tezuka's Buddha is certainly 'epic' in this modern sense but more so in the word's true sense - for it is the story of the life and achievements of a heroic figure living in a heroic age, told with (for manga/comics anyway) an elevated sense of style and substance. As cringe worthy as it may seem to mention what is typically still seen as children’s illustrations by many people in the same sentence as say the Odyssey or Aeneid, if a comic or manga was said to come closest to the ideals and purpose of these classics, Buddha would be it. So what is it about? As the title suggest it is the story of the (both historical and legendary) Gautama Buddha - from his noble birth, trials as ascetic through his enlightenment and death. The story leans a bit towards the fantastic rather than purely historical in this regard, relying more on the legend than known facts about his life. As with any historical religious figure it is hard for even the most learned scholar to separate fact from fiction. Tezuka doesn't even attempt to do so and the work is better for it. After all, the work is more about the teachings of the Buddha rather than the how, when and why of the historical figure. That being said, do not take the work as some sort of Buddhist manifesto or religious debate laid out in a childish package. Part of Tezuka's genius is that, despite the subtleness in which he brings meaning to his work, he never loses the main purpose of the medium - to entertain an audience. And you will certainly be entertained over the 8* volumes. However the story is much larger than Gautama himself. From before his birth until his death, his life is merely the binding chain of a whole whirlwind of lives and stories. From pariahs and paupers to kings, thieves, monks and soldiers, Buddha is not just one story but many interacting with each other as we witness the rise and fall of kingdoms during war, famine and prosperity. The historical accuracy of much of the events is questionable, and the supernatural as well as slapstick comedy does feature heavily in places, but the entertainment value is without a doubt excellent. A true epic in anyone’s terms. Art: The artwork and character designs are typical Tezuka. Originally inspired by the old Disney and Fleischer cartoons of his day, many of the designs lend more towards caricature then the 'stylised reality' one sees in more modern manga. Expect to see out of proportion facial features and the like. Like any artwork, your own personal taste will determine whether you like this style or not, but it is done competently and with a particular flare common to Tezuka's art. Another feature of the art which should be mentioned is the cinematic aspect to the work as well as some of the action and drama sequences. Some panels will highlight the grandness of a king's court, the sweep of the indian landscape, or the change of expression on a face over a number of frames. Some of the action sequences resemble a storyboard found in an animation studio, zooming in and out highlighting the fight at hand. Overall the artwork is beautiful in it's simplicity of style and movement. Characters: There are a lot of characters in Buddha. So much so that when they drop out then reappear sometime later it is hard to remember who they are and why one should care. This won't be a trouble for some but if, like me, you read it over months rather than all in one go it can get a bit confusing at times. With that out of the way, one certainly gets a sense of metamorphosis in some of the main characters. Gautama obviously goes from a noble prince to almost starving to death to a god-like figure, but he is not the only one who changes in the course of the story. Neither are characters separated into generic 'heroes and villains.' Over the course of their lives we see what drives them, not through a some flashback gimmick, but as their lives unfold on the page. Even some of the characters inserted for comic relief have some degree of depth as we see them evolve. Overall: What else is there left to say about Buddha? Tezuka's work is highly regarded both in Japan and overseas, and this is certainly one of his crowning achievements. I would go so far as to say it is better than Phoenix, but I will leave others to judge that for themselves. If you are a already a fan of his previous work than you shouldn't hesitate to pick this up. If you haven't read any of his manga yet then Buddha is as good a place to start as any. You certainly won't find anything else like it. *Originally 14 volumes (listed on this site), The english translation is collected into 8. 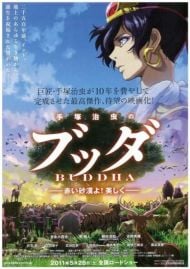 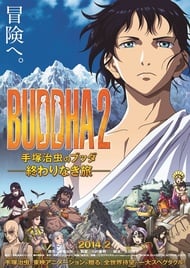