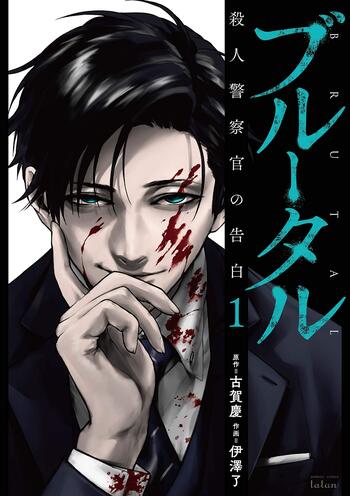 If you're looking for manga similar to Brutal: Satsujin Kansatsukan no Kokuhaku, you might like these titles.

”Is it okay to kill people?" In order to defeat several non-human monsters, the boy also became something non-human. Shin Uruma, a sixth-grade student, was named "Experimental body: A" by five of his classmates and was severely bullied and lived in hell. His only peace was with his brother, who loved him, and his parents, who protected him.... . until the five monsters killed his family. When he finally loses everything and faces true hell, a dark "wish" is born inside Shun. He was reborn under the training of his grandfather, who served in a secret unit during WWII. Now, four years later, he appears in front of his fated enemy. "I won't let ANYONE get in the way of my revenge."

Both manga have that type of "revenge beat". Although in Brutal: Satsujin Kansatsukan no Kokuhaku, the main character is more like a vigilante & the other one is getting revenge on cruel people from his past.

Neglected wife commits adultery with the delivery boy, but unbeknownst to her, her husband is an assassin.

Household affairs has a few chapters with a serial killer. Both manga/manhwa are intense and bloody, and both are josei. Make sure to give it a read!

While Dendrobates is not as severely graphic or disturbing as Brutal is (it is still graphic). It has the same premise. Cop by day but, during the night, they become ruthless and 'assassins' to kill the people who deserve it. Both have good storylines and if you like one, the other should also be entertaining.

If you like Horror and Crime you would like these. They are both a bit gory as well with a funny and likable protagonist!

Matsuri is a girl who continues to kill others by impulse while her father who is the mayor continues to cover her crimes. Momose is the detective that Matsuri has fallen in love with as well as the son of the man she has killed. Momose does not know this and has already overcome many of the traps she has set for him while he tries to uncover the culprit. In the end, will he be able to reach the truth?

A newspaper-masked vigilante who broadcasts his acts of vengeance before committing them. A newly-formed police division tackling the new frontier of internet-based crime. As the sun rises on the Era of Information, can a group of people who found themselves at the bottom of the food chain rattle society through the web and avenge a fallen friend?

Countless foes of the Dark Knight, Batman, are safe within Arkham Asylum and Gotham City is as safe as ever – or so everyone thought. While visiting the city to interview the caped crusader himself, a Japanese news correspondent named Yuko finds herself as Two Face’s hostage – but there’s a catch. Two Face was supposed to be locked away for good. Though Batman arrives and saves the day, it becomes ominously clear that danger is afoot in Gotham City, and a designer drug is somehow connected. As the mystery unravels, however, Batman soon discovers that Yuko may be inadvertently connected to the crimes...