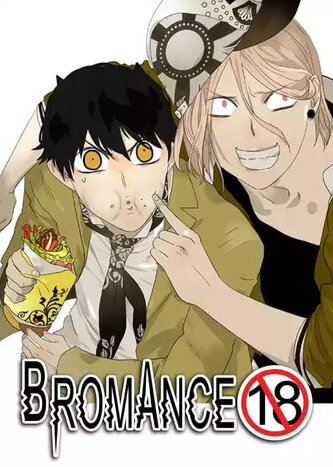 basically the same idea and story line. In both , they start out as best friends. Their peers around them peg them for more than friends and you can also see one of them are each aware of some sort of feelings for the other

they have a very similar writing style, as in like a daily comic or something similar where a plot isn't woven into the aspects of the character's lives rather than the things they do are always revolving around the plot(can't explain lol) there is no real sense of time and there's a vague direction to where the story is going, similar to 19 days.

theres also bromance and comedy, not as much crazy drama and action though. Also, I feel like so far from what I've read, the characters in 19 days are more fleshed out than in 18 unlimited, however I haven't got too far with 18'

good reads both ways, and of a similar length (lots of shorter chapters)

Similar in the way you will ship them! Really nice art and easy going humor. I just want them to get it on ;u; 19 Days seem a bit more mature but dang, it's all so good!

Invite A Wolf Into The House

I Work For All

In a reality that may not be too fat from our owns, everyone has a existing values. The value determines what a person can do, or can’t. When the value gets to zero, the government thinning program will automatically take away the person for the better use of the social resources. And our main hero, Sean Lee, finds himself stuck in this world. What’s more, he has no motivation to do anything…

By chance, Fang Tang came across Ah Shu, someone he noticed long ago. The two became classmates and intimate friends.

Our famous star realized two facts that give him a headache: One, he is gay but that's not even the worst part; two, the guy he likes is being forced by his family to go on blind dates and that's terrible!

He is a sunny, hilarious, positive, and obscure actor. He is a composed, generous and graceful general manager. Because of a strange request, they began a long journey of attracting each other. What should they do? Nonsense, of course becoming lovers.