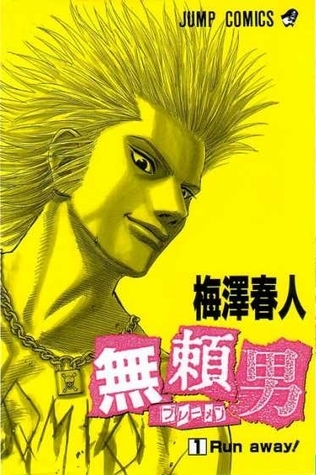 The story begins with two guys who're both run aways. One of them plays guitar wants to start a great rock band, and an other just wants to be great. They decide to travel togheter to tokyo and while they're on the way they find themselfs a drummer and bass guitarist. They encouter many difficulties but overcome these everytime just by brute strenght and continue their way too the top.

They have very different personalities but share the same dream and believes wich is ofcourse Rock. There is a very strond, loud and bold "main" character. A softer but still strong character. A guy who dresses as a girl and also a bit of quite but nessasery character.

The first halve of this manga was okay. It made me laugh several times and got me into the story by their "believes" in rock. The friendship they create is very touching and you like too see more of their adventures to become great. But after almost half the chapters the story gets a new plot twist and this twist really kinda ruins the whole story. It gets hard to believe and it just doesn't fit the first half. It gets kinda syfi-ish.

Too bad that the story had too finish like that  but overall I still find it a decent comedy manga.