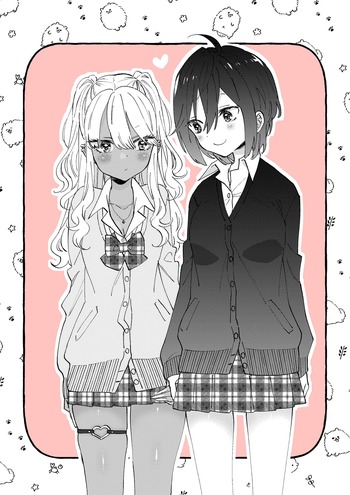 The story of a psychotic lover Hime fell in love with Kazuki since the first encounter and had been dating for 6 months, but just realized that Kazuki is not a man.

The love story between a gyaru and her classmate who she mistakes as a guy outside of school, bonding over their mutual love for rock music.

Hot Milk to Kimi no Koe

7 years have passed by and she encounters the boy who loved her, but she doesn't know that he's actually a woman.

Hinata is an introverted geek who sits next to Mikage, a gal, in class. Hinata realizes that Mikage is a former friend from elementary school, and attempts to rekindle their friendship.

Saotome is the top Gyaru in class: loud, sociable, and stylish. Otonashi, on the other hand, is a stereotypical nerd. However, they both have secret tastes that clash sharply with their chosen public images... So what'll happen once each girl discovers the other's secret?

Meguru is a high school gal (gyaru) with a reputation for having a long love history... But in reality she is a pure girl with horrible luck in love. One day, Meguru saves a woman from a pervert. That woman turns out to be a beautiful and humble office worker named Yukiho... But, despite her seemingly holy personality, Yukiho has a hidden side...