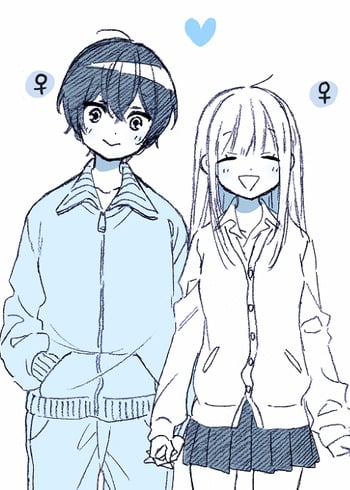 This is so precious! An overload of cuteness and fluff is all you'll find here and that suits me just fine! I hope it gets continued soon because after reading an unsatisfactory manga this is just what I needed to pick my spirits up. Also didn't expect it to be so endearing even though there's no buildup to anything and yet I think the characters are more well developed and the story more coherent than the almost 80 chapter manga I read prior to this. The shortness of it is a pretty big drawback though because I want to read every little thing about these lovable goofs.

Each chapter is about three pages long. Most of them use blue shading to accent the artwork, using various shades of blue, but some of them do the same type of thing but with shades of red instead. Either way, the artwork is very beautiful and pleasant and is clearly the main appeal of this manga. The basic plot involves two girls who both like each other, with an emphasis on Hime gushing over Kazuki's hotness. There isn't really any drama--just acceptance of each other. As the story progresses, I expect them to continue to become more sexually comfortable with each other (though I'm not sure how much the manga will actually portray); so far, they've touched each other's boobs over their clothes and Hime has asked someone about the mechanics of lesbian sex in preparation.