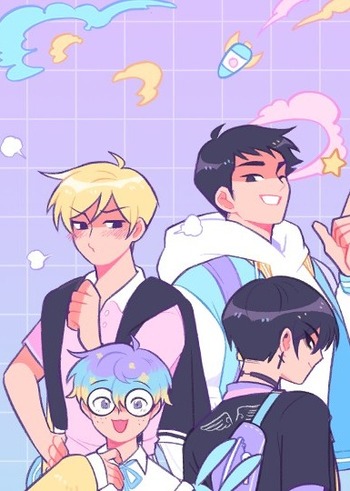 Honestly this story is fluff, fluff and more FLUFF!

DO NOT read it if you are expecting some sort of reality and conflicts. The flow of the story is too smooth. It is mainly focused on the dynamics of the four boyfriends. There are barely any conflicts and most of them are based on insecurities of the guys and are resolved easily with communication and assurance from their boyfriends.

There is a lot of inclusivity in terms of characters and there is NO HOMOPHOBIA at any point of the story.

IT IS JUST TOO DAMN CUTE!!!!! It is good for escaping reality.

If you want some sort of actual representation of polyarmory along with conflicts and ups and downs, this is NOT for you.

This webtoon will give you a tooth ache due to the overwhelming SWEETNESS!

A light-hearted comic about 4 guys in a polyamorous relationship. Often has quite a few anime/pop culture references/gags and other stuff relating to anime fandom culture.

As the comic is very slice of life-y, the story is really only present in the start when the four slowly get closer to each other and choose to start the relationship. After that, the series is mostly just single episode arcs (with a few exceptions) that feature comedic situations, often relating to romance and relationships, and show how the characters deal with them. Though the story isn't that interesting, I still recommend reading the comic for the characters.

The cutesy art style that the author uses really fits the genre and is very pleasing, clean and easy to read. The colours used are pretty and match the art style very well. The expressive style greatly improves the comedy and helps with showing many different kinds of emotions, whether it is a serious emotional moment a character has, or for example, a very dramatic reaction to seeing a cute cat.

The main four characters are based off of basic high-school stereotypes: The Prep, Goth, Nerd and Jock. Though they usually match their stereotypes well, the comic makes sure to show that their stereotypes aren't their entire personality. All of the characters have some quirks that don't fit their stereotype at all, which makes for some good gap moe. For example: Prep not liking sports and often being loud and dramatic, Goth not actually knowing how to play any musical instrument, Nerd secretly being a huge pervert, and Jock taking interest in feminine stuff, and actually being a very kind, caring person.

The characters are the main forte of the series, and also my favourite part of the comic because I enjoy seeing how they interact with each other and come to terms with their differences.

The comic is very entertaining and sometimes very heartwarming. I recommend reading it if you have free time and like BL and slice of life.

the wasnt really a plot.. and im not really a fan of polyamory. andd i disliked how clumsy and naive the rainbowed haired boy was.

Amazing!!! Best webtoon eeever made (I'm so glad now that the author could turn it into a webtoon originals （＾ω＾）)

seriously it's one of my favorites webtoons ever. The characters are just so perfect and relatable, and funny af!!! You will fall in love for each and every character.

the artstyle is sooooo good and aaaaaah it's amazing!!! I swear read it! You won't regret!

(also i have a "forgot the name in english" with a bunch of drawings of them, https://pin.it/6vR7YrK here, you can take a look if you are interested)