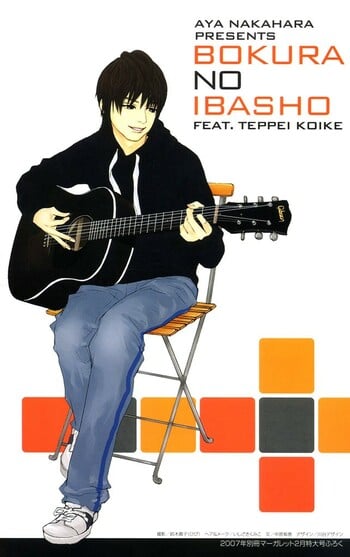 The story will deal with Nakagawa's coming-of-age as she dealt with grade-school bullying and the passing of her father.

Kanamu's favourite time of day is after school, when she meets to practice with her three-person band, "Chocolat no Yell." She may be inexperienced, but she's determined to do well. If only Rito, her senpai in the light music club, weren't always showing up to pick on her. With the band's first live performance coming up, will everything go off without a hitch? And what exactly is Rito's problem, anyway?

John Lennon was a 20th-century Academy Award and Grammy Award-winning English songwriter, singer, instrumentalist, graphic artist, author and political activist who gained worldwide fame as one of the founders of The Beatles.

Entranced by his music, Mizuki fell in love with Wataru two years ago. Hiding her true feelings, she continues to cheer for him as a friend. Will she be able to strike a cord in Wataru's heart?...

Akaza is singing and playing her guitar on a windy day when her music sheets fly away. Then a man comes up to her and asks her to sing for him. Is it just a song he wants, or does he have ulterior motives?

This series redraws the period of the life of the actress/singer/idol Aya Ueto up to the point when the movie Azumi is realized.

The Sound of Bells: Encore

After accepting a love confession from fellow music conservatory student, find out what becomes of our loving couple as well as the status of their career goals. Is Hiromi fulfilling her role as a music manager and does Tomoko actually make it into the Philharmonic?