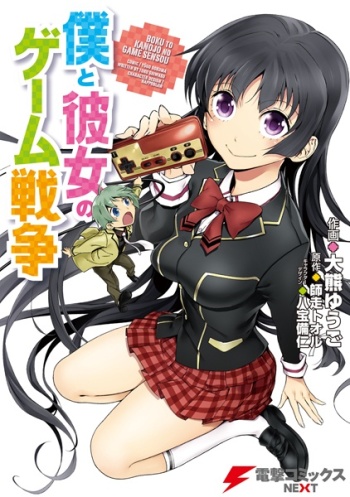 If you're looking for anime similar to Boku to Kanojo no Game Sensou, you might like these titles.

Mizuki Hijiri just transferred schools, but her chances of having a quiet high school life shatter when she meets the eccentric members of the Hero Club! These “chunibyo” dudes and their youthful delusions of grandeur quickly sweep Mizuki into a world of outrageous hijinks and nonstop fantasy. Noda dreams of becoming a hero. Takashima, resident otaku, longs to date only 2D girls. Tsukumo fancies himself the school’s master manipulator. And then there’s Nakamura, a reincarnation of an angel… or a devil, depending on the day. Mizuki has her work cut out for her in the Hero Club, because while their delusions might be the stuff of fantasy, the trouble they cause is as real as it gets!