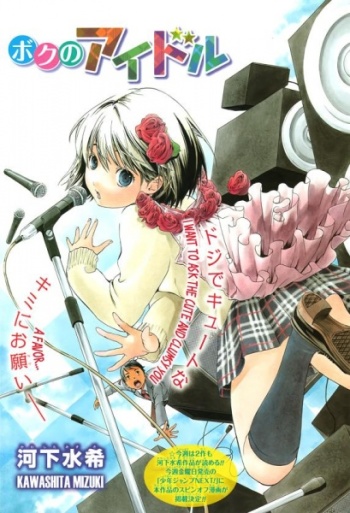 Hey you! Ugly boy! Are you feeling the pain of being unattractive? Did you get rejected by the girl you like? Did she not even noticed your existence? Well, fear not! ANTI LOVE SENTAI IS HERE FOR YOU!!!

It's about an odd girl doing odd things.

Touri is a boy who lives a secret life as an illustrator. He lives that life without any trouble at his high school, but suddenly a conspicuous girl, the literal embodiment of self-assertion, appears… “Become my drawing Sensei”, she suggests, changing Touri’s stable life!?

A boy and his senpai get kinky in a classroom after school.

Isumi Seiji is a high school art student who frequently coaxes female students into becoming his models, and Takamiya Ayase, is the student council president who always reprimands him. After repeatedly refusing to become Seiji's model, Ayase decides that the only way to stop him is to disband the art club. As she attempts to do so, however, she is cursed by a third party, and the only one who can free her from the curse is none other than Seiji.

Miki-kun likes the girls in school. A lot. One day, he meets someone in class who shares his interest in girls...

Inasaki Komi is a popular highschooler, but what he did not expect was that someone like Sanami Nanai would like him. Although the girl is beautiful and a great student, she has a sinister aura around her. Now Inasaki just wants to find a way to get rid of Sanami, and it appears the best way to do this is to make her hate him.

An explorer's adventure in search of the ancient civilization of Atlantis inside a little girl's room.

Because It Is There!!!