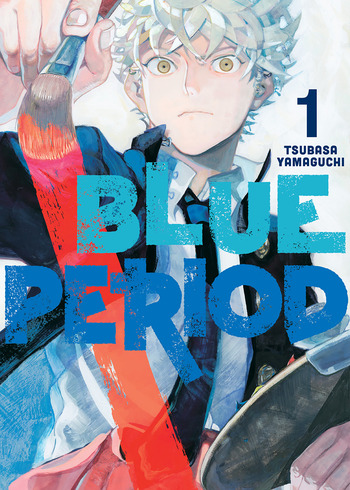 i didnt think i would be making a review on this manga, but after binge reading quite a bit i decided i should.

in short, this is a story about the main character, yaguchi yatora, and his growing love for art. the ups and downs of his experiencen including his college entrance exams.

it may seem like a bland topic from the first glance, but there is a very complex and interesting story. you will dive first person into yaguchi's life and learn about art alongside him. witness his highs and lows and watch as he improves and encounters new people with differing talents.

this story is amazing, the art is amazing, its all so good. yatora is a very relatable and easy to understand and like character, with a very intense enjoyment and love for art. the reader can definitely relate to him if they are an artist themselves considering im sure every artist has been discouraged at least once!

i really cant wait to see where this goes and cannot wait for the anime adaptation, i really hope this series gets the recognition it deserves. please check it out!

The base was unique but the execution was terrible. There was a lot of disharmony between plot points.

First, let us start with art. It felt too conjusted, too claustrophobic. It was detailed yet shabby.

Next, the story. We start of with an aimless boy who is good at everything suddenly finding his 'passion'. But the switch that was supposed to happen was horribly paced. The switch is meant to be a moment where readers pause and take in the awe but here it was confusing due to the terrible pacing. Even as we go ahead, the author glosses over so many important and potential plot points. Unsaid dialogues, broken panels, and unwritten stories. It was horrible. It sucked the joy out of such a potential piece.

Lastly, the characters. There were so many unique characters but author stubbornly focuses on the main character. Author gives us glimpses of the side characters and then completely forgets about them. We know MC has a lot of friends, but we don't see any backstory on them. There are so manny unique characters who have their own struggles but author simply throws their story under the rug. He could have done so through MC but it feels as if the moment MC took up a brush, he forgot everything. His diliquent friends, the talented senpai or the first genius he ever laid his eyes on or the genius who lives in the shadows of her sister. Everything is forgotten and ruined. They are given like two panels worth of screen time.

At ch 20, the only one with any significat screen time apart from MC is the queer crossdressing classmate. I am glad that at least author did him a justice.

Over all even his skills as an artist are broken due to the terrible pacing. We only know he works hard. But his struggles are often cut short by author who dos not bother explaining everything properly. It was frustrating reading such a broken masterpiece.

TL;DR - One of my favorite mangas, on-par with Ballroom e Youkoso.

With the influx of garbage isekai with overpowered main characters and unnecessary harems, I started reading this manga in the hopes of something a little different and more unique.

Boy, I was not expecting it to be this good.

The story is not necessarily anything completely new or different - there are plenty of other manga out there about young teenager(s) exploring a new passion or field.

What makes this stand out is just how lovable and relatable Yatora, our MC, is. He's not a cuck. He's not some overpowered Chad every girl falls in love with. He's not your typical run-of-the-mill shounen who powers through everything with high energy, blind optimism, and the power of friendship.

He's a realistic, reasonable guy who has his own struggles and insecurities, and (goddamn finally) has high emotional intelligence. Like, I cannot tell you how fucking refreshing it is to have a main character who doesn't have the emotional depth of a squid. He can read the room. He can understand and empathize with others. And he, despite his appearance, gains a real appreciation for art.

Where other stories use the character's disposition as a comedic device, this delinquent-looking, carefree guy genuinely wanting to pursue something so out-of-left-field like art made for such a good story and functions as a central part of his character development in the initial arcs.

The story is only compounded by the really interesting, dynamic, realistic characters that Yatora meets and grows with along the journey.

To be honest, the art starts out kinda sloppy at the beginning. The occasional misproportioned or skewed perspective, some weird-looking characters, etc.

But by about 25ish chapters in, the art style starts becoming a lot more consistent, and now at Ch. 37 (when this review was written) I genuinely have a crush on several extremely attractive characters. The shading/lighting in certain frames is spot-on, did a great job with conveying emotions and mood.

I sang some praises for character development in the story section above, but I really, really enjoy all of the characters. None of them feel pointless - even if they're just extras or minor characters, they play an important part in either propelling the growth of our main/secondary characters or progressing the story.

None of the women have unreasonably, madly fallen in love with the main character. Everyone (even the children!) is multi-dimensional and complex. And clearly, this manga is written by someone who actually has friends in real life or at least understands relationships and how other people think/act.

At a minimum, it's not just some lonely middle-aged man's fantasy given comic form like so many other manga.

There are some LGBTQ themes, which I understand is not everyone's cup of coffee, but it's not a central focus of the story. One of Yatora's best friends is a cross-dresser and bisexual, and the depiction of how they struggle with it (especially in sexist, bigoted Japan) is very realistic and emotional.

My one and only gripe with the story so far is that there is zero romance. It actually bothers me, because the emotional struggles and the way the characters and their relationships develop are portrayed so well, I was honestly expecting someone to have fallen in love by now.

9.5/10. Definitely recommend you pick this up and read it, especially if you're like me and tired of all the goddamn overpowered, sword-wielding Brads/Chads who've been spirited to new worlds. One other manga that is very similar to this one in terms of quality and character development is Ballroom e Youkoso. If you haven't already read it and are looking for something else along similar lines, definitely check it out.

This is an amazing manga. The characters are well developed, and it's a really enjoyable read. I've read so much manga, and this is the first review I've written. I hope others can give this manga a chance.

I love art. And I love how the author does it with emotions.