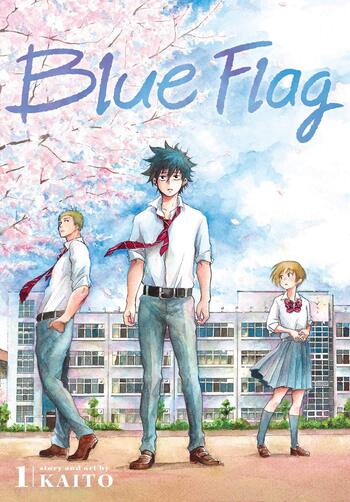 The story starts out simple, Ichinose (MC) is asked by his crush to help her date his best friend. The development of these two characters develops wonderfully as they work to better understand themselves and learn of their own self-value. There are also themes of LGBT+ romance as two of the characters have to come to terms that the people they have a crush on is unrequited due to the fact they are the same gender. One of the characters reveals this and from there the story takes a huge dive into more of a philosophical discussion on peoples feeling and what can be viewed as the right or wrong thing to do. The second half is a much harder read than the beginning and leaves you somewhat confused about what's being said. Overall I think the story starts out really good but the second half can leave you confused and unsatisfied.

What a disappointment. The first 2 or 3 volumes of blue flag are some of the most enjoyable teen angst manga I've read in years, with terrific art (including very funny chibis in the comedy moments) and a slow but steady build up of what the story is really about, not just teen love and love triangles but dealing with the feelings of unrequited love that come with having same sex attraction for a same sex heterosexual friend, and of course on top of everything there's themes of growing up and coming to terms with who you are.

Then halfway through the series, right when the plot comes to a climax everything completely derails, the tense interpersonal drama of the first 4 volumes? Completely vanished, and in its place we get almost 4 full volumes of every character going one by one and giving massive tedious monologues. It's awkward for the medium of manga, it may as well be a novel since visual storytelling all but vanishes until the final chapters, it's completely unrealistic because people in real life don't actually communicate via 10 minute monologues at each other, it's even more unrealistic because they're simply too clever and articulate for 15 year olds, certainly too articulate and introspective for the characters we thought we had gotten to know in the first half of the series, worst of all they're still not interesting enough to say anything worthwhile. It's probably more enjoyable to listen to actual teenagers talk about their personal philosophies, because at least they'd say some funny dumb stuff every once in a while. In the afterwards of the manga the author states that they just learned about LGBT for the first time while making this manga and were trying to learn all they could, and that's pretty much what the second half of this series feels like: the author hashing out all these new ideas they learned about using the characters as mouthpieces, to hell with whether or not it makes sense for the characters.

Which leads to the ending. If it had ended halfway through the final chapter, before the time skip, it would have been a much more satisfying ending, and one that was much more true to the themes of the work, the MC, who has struggled to come to terms with his childhood friend being gay finally fully comes to term with and decides that, yes, he can still be friends with him like before. It's very touching, and a nice message. Then we skip ahead to the future and learn that the MC, who has only ever been attracted to women the entire series, broke up with his girlfriend to marry his male friend. Oh, and the lesbian best friend of the MC's girlfriend? The one who is a hardcore lesbian whose character is all about being a lesbian and monologues about it all the time in the latter half of the series? Married a guy. Huh?? I can't say anything positive about this ending, these plot points could have been made to work if they were based on ideas introduced throughout the series but it all flies completely in the face of the characterization and even the themes of the story.

If this manga had been as good as it was in the first half the whole time I would have happily given it a 9 or 10; if it had ended before the timeskip I'd probably say 7; but I can't in fairness call it anything above a 4 as it stands, with the only positivities coming from the first half. In my own personal ranking I'm giving it a 1 because nothing make me angrier than a bad ending, but for this review I'm trying to be objective. Only read this manga if you just want to see a BL ending and don't care if it's written with any intelligence or tact (and also if you don't care about how female gay characters are handled)

This is my new favorite manga for all eternity.

I have never in my life read a manga as 3Dimensional and well spoken as this one. In a single chapter, this story covered a conversation on the acceptance and rejection of same-sex couples in a way that would normally take an entire storyline to fully convey. Both sides were presented with honest and relatable emotions and the argument wasn't resolved (which I liked). I liked that it wasn't resolved because it reflected real life. These types of arguments and disputes are never truly solved. The only thing we can do is make sure that our point was made and that we listened in turn.

I also genuinely loved the way the ending was handled.

Amazing/10 I would read this again and again.

The reason I rated it this high was because it talked about big issues concerning identity. Whether it be sexual identity or how you want to be precived as. This story had some emotional points which I appreciate. Also the ending was good.

I love seeing confeemasion that Tiachi was bisexual. Also that he married man. Whish the author would have talked more about Tomua in the end.

At first, I thought I wouldn't like it because I don't really read Shounen. I'm more of a Shoujo gal especially with the art style. Thank God I decided to give this a chance. It was so beautifully written, the characters and the story just captivated me. I really can't explain what sets this apart from other romance mangas so I'll just leave some of the quotes/dialogues that truly resonated with me.

1. "I want to live with freedom. I want to be able to say I love what I love. To not hurt anyone. Or be hurt by anyone."
2. "If I make a bunch of lies right now and you believe them, then those become your truth. But if I tell you the absolute truth and you don't believe me, then they won't become your truth."

Do yourself a favor and pick this up asap.