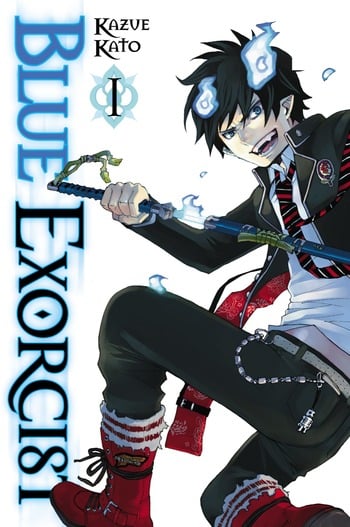 I love Blue exorcist.
Why you may ask?
Blue Exorcist is sad but funny at the same time.
Most Anime/Manga are serious or just funny
but Blue Exorcist is both.
One minute I would be crying and the next I would be laughing
Rin is just an innocent kid who lost the only family he knew.
The characters are unquie and one of a kind.
Over all a great story.

This manga is my all time favorite so far I loved the anime however the manga and anime r different towards the ending of the anime. The manga goes into way more depth the newest chapters reveal that some of the bleh kinda characters actually aren’t bleh. They have many secrets that are still slowly revealing themselves to the reader. The story is about rin and his twin brother and the hard ships they go through. Dealing with the fact that they r the spawn of Satan and have about like 5 or 7 other half brothers that r also demons. A lot of the characters in the manga r very colorful and there r some raunchy parts. There is even some half nude seens but they are much farther down the storyline. Over all I think it is a very good manga to read!

Though I like the storyline in the anime a bit better, the manga story line does not fail!

Most of the characters are wonderful, but others *cough* Shiem. *cough* kind of havd no purpouse in the manga.

There are a lot of overrated manga in this world. Enter "Blue Exorcist" ("Ao no Exorcist").

Story: Okumura Rin is your typical teenage boy. However, an unfortunate event involving MOTHERF*CKING SATAN causes his adoptive father to die, and Rin to learn that he is the bastard offspring of Satan. He then starts to go to a school for exorcists (because typical shounen hero is going to save his friends and "kick Satan's ass!") and meets a bunch of characters along the way. (And his douchestreetcar of a brother is his teacher.)

This sounds pretty cool and less generic than it could sound. Unfortunately, it is brought down by a few things:

1. Every character is some archetype.

Yes, you read that correctly: The borderline-ecchi. And yes, the mangaka is female. This is just so, so wrong.

But, more on those things later. The storyline itself is okay.

Art: Aha. I noticed one or two panty shots (neither was in-your-face), and then there's that bitch. No, not Shiemi (she will get skewered LATER), but Shura. Her breasts are huge, and she always wears a bikini. Aside from the fact that my hoe alarm is going off at full blast, the mangaka can't even DRAW breasts that well. Shura's chest is drawn like a child's squiggle--deformed by that tight bikini. It is in no way sexy, and it is just offensive. That is the only "nudity," in case you cared.

Moving past the almost-but-not-quite-ecchi, there is the rest of the art. It is average, and character designs are the same. Don't read it for the art, certainly.

Characters: Oh dear. This series is still ongoing, so development may happen, but it certainly isn't happening yet.

Okumura Rin: Naruto, Ichigo... he could be any shounen manga hero, and he would be, expect that he's Satan's son. Nothing interesting to say here!

Okumura Yukio: The mature, sophisticated brother with a mole complex. He is, apparently, SEXY AND HE KNOWS IT, because he doesn't mind being seen almost naked. There is something seriously messed up with that.

Moriyama Shiemi: For a female mangaka, she is one USELESS little lady. If you like her, you have some patience. It would be a much more likable series if she got killed off. She dresses rather conservatively (a blessing in this series), but she often wears the skimpy school uniform instead of her pretty yukata or kimono or whatever. Ah... you know, I don't care how she dresses. Just, kill her already, pretty please?

Shima Renzou: Your typical flirt. He is yet-another archetype.

Kamiki Izumo: I'm aware I poked fun at her eyebrows, but she is, perhaps, the only likable female in this series. Unfortunately, her presence is basically pointless.

Kirigakure Shura: Must. Resist. Tempation. To. Include. Song. Argh, and I can think of so many! She is a complete prostitute. Is she a useful character? Hahaha--no. (Unless you count that crudely drawn chest.) For an idea of how she acts, think of, oh, Rias Gremory from "Highschool DxD:" She has a pair of breasts which could sink a cruise ship. She doesn't mind being seen in only her panties (no full nudity in this manga). She has a love interest and she is supposed to be likable. Leave, woman. (Or should I say, "MOVE, BITCH. GET OUT DA WAY. GET OUT DA WAY BITCH GET OUT DA WAY!" *Shot.*)

Pheles Mephisto: The only character with more than an ounce of personality. He is lively and flamboyant. Compare him to Grell from "Kuroshitsuji." (Actually, don't. Grell is much too awesome.)

Amaimon: Another annoying character. There is certainly a surplus of those.

Miwa Konekomaru: He's not in the picture, but that doesn't matter. I want to punch him into a deep, dark hole.

Overall: Overrated, dislikable and unfortunate. It could have been better. Could have, would have, should have... wasn't. I blame the mangaka and her... oh gosh, why is she a woman?! It's starting to creep me out.