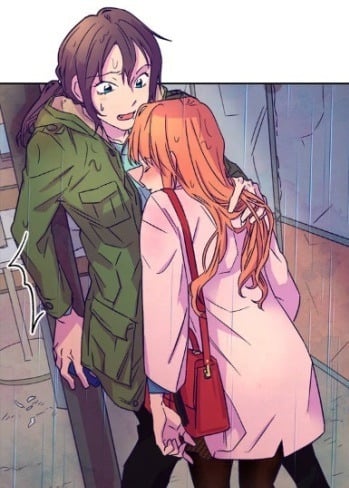 Spoiler warning for the long review below. In short, there was a lot of potential but ultimately it was dissatisfying and disappointing. Characters didn't grow enough and the story was really lacking, didn't feel like we were reading the most interesting bits about their lives. The art was splendid though which kept me coming back along with the hope of better resolution to things than we actually got. Don't know if I would recommend to be honest; it would have been better if no mature/deep themes (which were left half baked) were touched on and it was all fluff.

On to the detailed review:

I feel really dissatisfied at the ending. Feels kinda wrong to start with a negative so I'll list some positives about this story:
Really liked the growth of Seowoo as a character. Her sister was a nice surprise and I would have liked to see them get closer. It would be really nice to see her have a positive familial relationship for once. Also liked some other side characters and it was nice to see Hayoung get some development. No complaints with the artwork though, it was splendid throughout. Especially loved the hands, they were drawn so well which is something I personally have a lot of trouble with so I really loved that.

Now on to the negatives:
The red head got some development but it was nowhere near enough and her relationship with Seowoo was the weakest part for me. It was all fluff and sex and kisses and hugs but it was lacking depth (though it started to get deep but it didn't last). Their chemistry just kinda fizzled out for me over the course of the story and I really couldn't understand why Seowoo was so into her. She was a much better person and deserved a lot more. Them ending up together should have been a triumph but it felt so predictable and shallow that I just couldn't get invested. Yi-Hwa was a much better character and I kinda wanted to see her getting together with Seowoo because they would have had much better chemistry in my opinion. The director Baek was a lost opportunity. Seeing her and Yi-Hwa end up together or at least try to make things work would have been so much more interesting, but she just would not be honest and it was so frustrating which kinda sums up most of the characters for me. Dishonest and frustrating. These two things are a couple of the most annoying things I find and this story had heaps of that. There wasn't much growth for anyone else except Seowoo and I couldn't help but notice a lot of lost potential.

People will counter with the fact that these characters are human and hence, not perfect. But being honest with someone you care about is not perfection, it's just being honest. And trust is the most vital part of any relationship which can't be built without honesty. Therefore, I felt more dissatisfied/disappointed with this story more than anything. A lot of potential lost in favour of a somewhat forced relationship more based on lust than love perhaps. So many more interesting characters ignored for an ultimately dull romance. 5/10 (I'm being generous here mostly because of the art and Seowoo)

I'm honestly going to say it right out, I really enjoyed this yuri. The issues with other yuris is that they take it WAY too fast; Blooming Sequence took a more steady and slow pace, which I feel as though, really helped when it came to representing the story and conflicts in it. It takes time to get over trauma and the author represented it purely through the pacing. I'm not sure if it was intentional or not, though, I really did appreciate it. The reason I gave it a 6/10, though, is because the author did not fully flesh out the trauma that the 2 MC's went through as children. Their trauma's effects are just briefly brought up when it comes to their personality and how they deal with situations. An example would be, Hayoung shows her sensitive side often when she doesn't get her way, that's because she had a quick shift between Independence and pure dependence on her lover. It makes complete sense, but is mainly shown as quick outbursts that only last a few panels. Seowoo clearly has insecurity issues and low self-esteem because of the way she was raised as a middle child. This was mentioned explicitly by Hayoung near the end, but it didn't take a huge role. I'd expect Seowoo to act extremely uneasy around unfamiliar situations such as inn the first few chapters. Though, her insecurity was completely thrown out the window after the first 10 chapters! Now, I won't blame the author for these since it is their first manga. It was, overall, extremely enjoyable. I just did not enjoy the lack of a conclusion and character development.

I'll have this section of the review brief and short. If you're looking for a yuri that incorporates a 90s manga style x Modern Yuri style, then this is your rec! The art was nice, to say the least. The only issue I've come with the art style is the sketchy nature of it. Though, when the painting panels come up, my heart is sent into orbit! Those specific panels were just so nice to look at and really pleased my eyes.

Don't get me wrong I really liked the couple in this, I thought it was absolutely wholesome! However I felt the reading dragged on and on as well being way too fixated on the other characters besides the couple. Also the ending wasn't satisfying enough which is why this manhwa doesn't get another a higher score I'm afraid.

It's a good read but has boring spots, just to keep in mind...