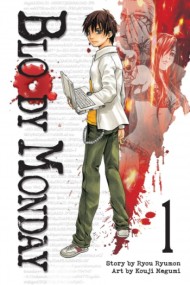 Takagi Fujimaru may seem like a regular high school student, but behind the cheery facade lies a genius hacker by the name of Falcon. When his father is framed for a murder, Falcon uses his brilliant hacking skills to try and protect his sister and clear his father's name. However, he finds that his father, an agent in an elite government agency, was involved with something far more complex than a simple murder. A terrorist group is plotting against the city of Tokyo and it is up to Falcon, with the help of his friends, to unravel the twisted plans set in place to kill millions of people.

Title: Bloody Monday Author: Ryuumon Ryou Artist: Megumi Kouji Gener(s): Action, Drama, Mature, Psychological, School Life, Sci-fi, Shounen Summary: A virus deal clinched in Russia on the Christmas Eve. Purpose: unknown. Two clues: a mysterious lady, "Maya," who is one of the gangsters, and "Bloody Monday," the keyword for the project. Then an incident happened in far-distant city of Tokyo. Fujimaru Takagi, a second year student at Mishiro Gakuin High School, is commissioned to find out the truth by the Public Security Intelligence Agency, for his great ability as a super hacker. Now, Maya approaches Fujimaru as his high school teacher.... Addictional Information: Truly marvelous story, one of my personal favorites. It has very steady climax, just enough to keep you hooked onto it. Plenty of twists and drama, making you craves for more and more. However, this is a completed series, a well-made. Lucky, there is a second series of Bloody Monday Season II, ready for more drama and twists. This is a manga you want to read. There is some of flaws in the story, but nothing enough to ruin your mood and craves for more.

This manga has everything that will piss you off down to your very bone and will frustrate you with every next page. So in short a waste of time and I am sure some of my brain cells are dead to trying to complete this manga. So baisically a religious cult is trying to destroy japan. The cult leader is of course, a 15 year old kid. And the one who will save everything is again, another 15 year old kib. In the mean process 90 % of the good honest characters(mostly police and secrect agents) end up dying like mosquitoes. At the end except main villian, which get killed so suddenly, all of the other side villian go back to their life admitting defeat and pleading brainwashing done by the cult as main culprit. In the end it shows how soft(infact coward) the japanese justice system has become. Infact, even the main villian was killed by an accomplice other wise I am sure even that would not have happened if it was left to our main charectors. 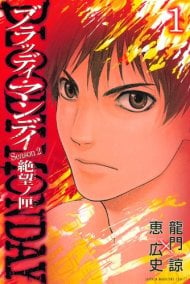 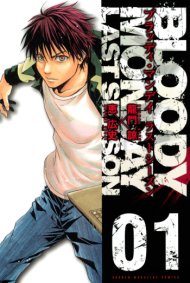