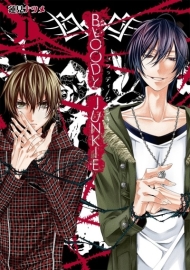 Shouta’s brother is missing, so when the boy received a text message telling him to go to a designated location, he truly believed he might finally learn what happened to his relative. But little did Shouta know that by following this clue he’d wake up in a prison of horrors, forced to participate in Bloody Junkie: a Battle Royale-style game where only one player can survive. Not only must the players kill to survive, they must appease their fans on social media who watch the privately-streamed games on the internet and chat with the competitors. Will Shouta discover the truth behind his brother’s disappearance, or more importantly, survive this bloody competition?

970 users are tracking this. Log in to see stats.

Story: A classic tale of guy winding up in a death match battle royale between a number of contestants for a hefty prize bag against his will. If it were a classic plot type/narrative/whosawhat then that would be disturbing but it's a normal guy in an relatively abnormal situation, and because it's a battle royale, blood and violence ensues, fun for all! Especially for the viewers, by which I don't mean you, and by which again is where it throws a nice curveball, as the entire thing is broadcasted online for a paid streaming internet show thing. Kinda like a pay-per-view thing, except it's more than a snuff film. Liked that bit as it adds in the metagame and commentary from a third party, through a chat-to-voice thing, through a specific contestant's ear piece. Real neat and loved that part. The game also features a bag, possibly filled with goodies and a random weapon, because bare-handed knuckle boxing MMA freestyle beatdown face-smash fest would be lopsided to the more athletic ones or beefier brawnier puglists so some "weapon" is in the bag, depending on what the handicap for the contestant is. Literally in quotes because the weapon varies in usefulness, from "creativity to make it work" to stabby stabby because all good battle royales feature stabby cutty tools. What I'm getting at here is explaining the game with too many words concerning equipment, and I like how they dealt with handicaps instead of it simply being a spin of the roulette wheel on what so and so gets. It goes a bit deeper and to it's credit, makes the game itself more interesting. The actual plot is this guy is looking for his brother, got wind of a clue, went to a meeting place, bing bang boom, winded up in the game. The backstory between the main and his brother is given and a few more details are dished out later on and all in all, I was interested in what happened to his brother. Don't know how little bro would have found out what happened to him through the game of eat or be eaten but it would have been lackluster. Probably. It gave just enough to make me make assumptions without being completely fuckballs outlandish but revelations aren't usually up to your standard or what you'd expect. Had hopes though. About time I came to this part but you see it being two volumes long, 9 chapters? The chapters are a beefy 40+ pages but no way it can produce a decent enough plot in a murder-style game in two volumes, right? Right, because it simply ends on a cliffhanger in the middle of a conversation and a beef between two guys. Just cuts it off because due to circumstances, it got most likely canned instead of put on hiatus. I was interested in what was going to happen and the foregone future event of the first few pages would pan out but alas, my curiosity would have to live on. I felt it had potential because main had potential to be a smart badass. He had the potential to do shit, get shit done and protect shit. Obviously it loses marks but still, I am a fan of this kind of stuff and the metagame within the game with outsider participation was something I was a fan of. Adds in a bit of comedy as well which isn't always bad. Art: Solid, don't think this style would lend itself to fluid blood shots or supreme gore a la Battle Royale but still looks like the stuff you'd find in a shoujo series, which is kinda neat. Pretty boys and gals gearing up to kill each other, and they do look good, with nary a hair out of place. Special mention goes to Boy-kun and his pimp outfit with eye-patch combo, wicked threads and makes him stand out from everybody else and their normal clothes. Characters: I guess we learn some things about the characters, mainly main guy and first girl, whose names I can't remember. That's just me though, nothing on their names. Everybody else, just names and faces for the most part. The readers can sense their motives and various character traits that directly concern the game and more amusingly, so can the viewers in-manga. They help flesh out the names with no backstories and generalized character types without knowing who they really are. There isn't enough to give all or most characters much more than a name and face with a few basic traits and as such one doesn't care much about them and one doesn't really hate them either, but that isn't much better. There was development from within occuring before it ended and liked what I saw there, because I knew it would lead to blood and crazy psychopathy later on. Lunatics do make it more fun. Overall: It had potential but it was cancelled before it could realize it, leaving questions unanswered and the outcome of certain events unexplained. I certainly enjoyed what I saw and the metagame was a great addition but don't entirely think it's worth a read due to it simply being unfinished. At the most a hesitant recommendation if you don't mind a non-ending. Otherwise, just skip it and go read Battle Royale, or reread it.

Good story. A real pageturner. Nice characters with surprise twists. INCOMPLETE though. It doesn't have an ending. The story stops halfway so idk who survives and what happened. Kn the last chapter 9.5 the author or artist did put a few pages with what would happen typed up but that's it. The typed up story also didn't have an ending