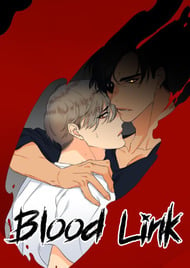 A human, lycan, or a vampire - what am I?! Completely unaware of the existence of these predators, Hwa Gok goes about his everyday life... That is, until Lee Bin turns his life upside down by biting him on the neck, setting off a whirlwind of events neither of them could foresee.

UGGGHHHHHHHH chap. 11 things are going ok,, and then "wow i smell a female lycan and wow it turns out that its the uke" WHAT. THERE WAS NO MENTION OF THIS BEING AN OMEGA-VERSE TYPE THING!!!!  nooooooooo Not to kink shame or anything (kink-shaming is my kink!) but I don't like BL where the uke is "oh he's a guy, but wait he's actually a girl/smells like a girl cuz dogs" Also the seme is.. less than what i expected. He's very asshole-ish and keeps blaming the uke, when the uke was trying to do the right thing. Also, I don't like how he completely disregards the uke when having sex. The uke will be like "Ow it hurts I'm serious" and then this seme will keep going anyway. Also the seme got jealous of the ukes friends, and actually like, glared at them and stuff, and I don't appreciate that. Like, as a seme, as a boyfriend, you gotta respect your partners personal life, unless it's you're partners kink, then go ahead, but um this wasn't presented as a kink type thing, so yeah the seme = big douch I like vampires in my BL, but if you don't want omga-verse stuff in it than skip this one. (unless your kink is to start reading something, get hooked, get dissapointed)

The review contains no spoiler but my edits do (edit is at the end) I gave it 5 stars.  Not to attack anyone because its your opinon but if you only read up to chapter 11, then ofc the characters are still gonna be full of flaws since there isn't time for character development.  This is not my favourite BL, but it is definately up there.  I actually dropped it around chapter 23 but then i was bored so i decieded try again and now i am so regretful that i didn't pick it up again sooner. Story Uke female werewolf but male human meets vampire seme.  Unique plot.  At first, being 100% honest, i read it for the smut (which is golden).  I dropped this story, since i thought it would be centered around the smutty smut smut and would lack in plot. I am on chapter 50 now, and i am cryyinnngg.  I don't want to spoil anything, but thier relationship is so beautiful now.  The plot is so beautful, not to mention, i am still waiting on the backstory of the seme.  Which i may have already read but then forgot. Art The art is beautiful, not neccessarly the best ever but definetely up there.  I love their eyes so much.  And when the seme goes batsh*t crazy, aka full badass vampir mode, the art and colours emphasize just how scary the seme is.  Colour palettes are very nice as well. The seme's dark brown hair compliments his golden eyes.  Uke is also really well drawn.  Character Seme (forgot his name): I love him.  He loves the uke so much, he has to consciecly tell the himself to control himself.  I won't reveal much, but at one point, uke tells seme that he is going to do something that the seme doesn't want.  But he finally tries, and ends up loving it. Uke (Hwa Gok): I don't like the really child looking ukes, the small ones (sory if you don't know what i mean), but anyway, i prefer a normal looking uke who is quite manly (but not too ripped) but then the seme comes along and dominates him.  That sounds weirder than it actually is, i just suck at explaining.  Hwa Gok is sorta a tsundere (yEs!), he is not a pushover (yEs!) but at the same time, he is a innocent cinnimon roll who needs to be protected/. Jinsu (Hwa Gok;s friend): this dude is so wholesome and i love characters who see one of the ML as platonic way, but the other ML gets jealous ever.  He easily accepts uke's sexuality which is why this dude made it on my character review.  Not to mention, he is hilarious imo. Side note, i like how the females in this BL aren't the shallow brats that too much BL makes them.  In BL, you would find how evil the female are, how much they diss they mc and etc.  Just very glad that there isn't any sterotypes like that in this manga. Overall 100% worth reading, if you arent sure, just try to read it and if you don't like it then fine.  But if you never try you will never know.  It is a bit omega verse, i normally really don't like the idea of alpha, beta, omega and men getting pregnant but this was amazing and beautiful.  It is a very good manga, the smut is better than some yaoi one shots that are only about sex, the story line is also amazing.  It has everything a great BL should have. EDIT: Chapter 54 and finally we have something that tbh more BL relationship needs: TRUST.  The person in BL  would normally see their partner with another lady/man and automatically assume he is cheating.  FINALLY a uke who doesn't jump to conclusions.  Also Jinsu is the best dude, he cares for the uke so much in a platonic way, where can i find a Jinsu T-T EDIT TWO: Their child is so adorable im crying (ch57) Random but this manwha has it all: LIGHT crossdressing for uke(nothing big)+ uke has to wear tights, VANILLA bdsm (the seme hands get tied) and they do it in the car.  ahh perfection. EDIT THREE: The seme's sister, i feel so bad for her, i thought she was evil and i was ready to hate her but now... i feel like she needs a hug (Ch63)

This is such a great read!  This story has it all - beautiful artwork, beautiful mc's, a great story and just the right balance between drama, sexiness and fluff ❤️ This is easily one of the best BL's I've read. I will go in more detail now (without spoilers)  The art: the characters are really beautiful and the detail are insane. Every detail is beautiful, and it is both the People, the background and right down to the very fingernails in every panel - I don't know if I have seen the same level of detail in any other manwha.  The story: the story was really great. It was well balanced - not too heavy and not too light. There is a lot of sexy scenes which are great, but there is just as much a very good story too. I like the story because it deals with themes you've seen before, but it just stats interesting because it is very well done. You will be worried and anxious, but not to the level that you just want to drop it, or just dont care anymore because the while story rides on misunderstandings and characters repeatedly doing stupid things (which i feel is a thing in a lot of bl manga/manwha). Also i like how versatile the story is. It is a fantasy setting and is about fantasy elements but Also deals a lot with anxieties, problems and good things you face in every relationship, so it is super relatable and very heartwarming too. Sexiness: there are a lot of sexy scenes, the guys are beautiful and the art is amazing and there is consent and variety - what's not to like? I cannot reccomend this enough ❤️ 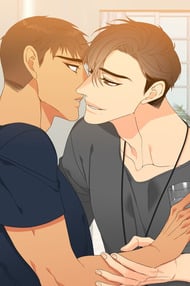 Brothers Without a Tomorrow
Author & Artist
See all staff