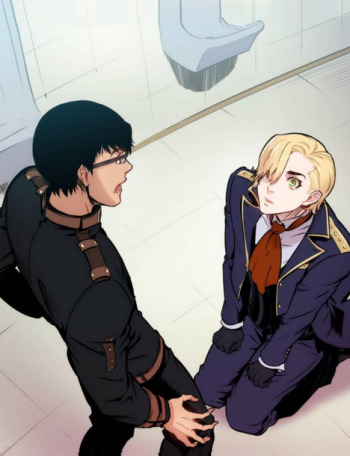 Iam new member in here i don't know read manga in here. can you tell me what should i do

The characters are very believable and I instantly fell in love with Shell's expressions.  One is more reserved but makes it that much more interesting to find his real feelings and motivations.  The world is decently developed and has a lot of potential for more stories.

The art is beautiful with great color choice and portrays the atmosphere perfectly with little effort.

The story is addicting and hooked me from the 1st chapter all the way to the 59th.  The plot may be forced at times, but the relationship between the main characters masks that well enough.  It's definitely one to pick up.

I'm bloody giving this a 10/10 (no pun intended)! I tried to read some mangas before, but Blood Bank caught my eye. Beautifully drawn, great story and some loveable characters, all of it in a simple-to-read package. Once I started, I couldn't stop until I finished it! Please, please, please, if you didn't start to read it, do it as fast as you can! Highly recommended.

Blood Bank is an emotional, moving, hot story that constantly had me wanting more. The story is well-developed and has a variety of elements including action, emotion, body horror/gore, explicit sex, and moving character development and background that add so much depth to the overall manwha. I finished the manwha with a fulfilled and content feeling, as all ends were tied, and... was sobbing, of course.

The lore had potential. Basically, the world is run by vampires and use/treat humans as livestock. Some vampires have abnormal traits but it's highly looked down upon in their society, thus being an "abnormal" must be secret.

However what I disliked was how seemingly rushed the story was towards the end. It may be an easy to read and understand Manhwa but it just seems like there could have been so much more put into it.

The art is absolutely gorgeous, it's complex and shows depth in serious scenes. And in the laid back more chill scenes, it can be really cute and charming.

As for the characters, personally I didn't like One, that's just me though, I don't know why, even though he was written decently, just personality wise he didn't appeal to me.
Shell Overlord though, holy f****** s*** is he my dream f***** sub. He may be an overlord on the outside who appears scary, but on the inside he's an innocent little submissive who would do anything to please his master. I have no words to describe him, this is probably my inner Fudanshi screaming, because I won't lie, I absolutely love this character. I love how he's written, I love his design. I just, ugh.