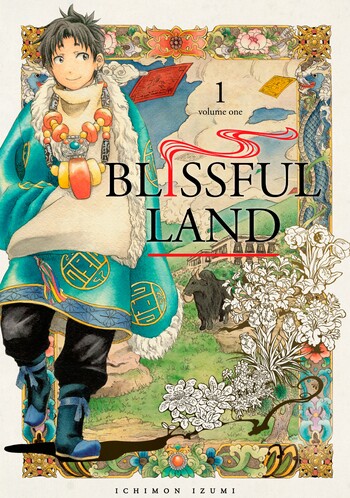 Most of the art is detailed and ornate, but this is frequently juxtaposed with obviously cartoonish features: wide cross-hatched shading for blushing cheeks and wide-eyed simplistic eyes reminiscent of Happy from Fairy Tail. The wide-eyed technique is used most frequently with Khang Zhipa, the main character, and it functions as a way to indicate that we shouldn't take fem too seriously--that even though fe's in a serious line of work fe still has fun as a doctor and especially loves gathering herbs. Zhipa wants to help other people who are suffering because fe empathizes with them too strongly and feels pain when they are in pain. Even if fe chose another line of work, fe would still be aware that people were out there suffering and this would bring fem discomfort.

This manga acts as a snapshot into antiquated medicinal practices, customs, and superstitions, but where all of the inconveniences are painted in a positive light as rustic. It plays into a sense of nostalgia and idealization of less industrialized cultures, to the point that it doesn't even portray patients paying for treatment, but rather implies that treatment is freely given because...community. Of course, I'm completely fine with that. I can enjoy a good escape fantasy without confusing the idealized world with what reality would be like. And the arranged marriage setup allows for an interesting dynamic in relationship growth: still allowing for slowly falling in love, getting jealous, and worrying if the other person likes fem, but with an added layer of certainty that no matter what ups and downs they go through, they will stay together.

Addendum: Each chapter is essentially a standalone story, showing off aspects of 18th century Tibetan culture. Though there are multiple chapters focusing on the horse-racing festival and several on the wedding. I appreciated some of the glimpses at this culture, especially the stories about the pilgrimage and the dead yak, but I found the wedding preparations and wedding itself to be a bit dull.